A 43 year old English man was given a suspended sentence after he pled guilty to crashing into a cafeteria whilst under the influence of alcohol.

The incident happened last Sunday at around 8.30pm. The accused crashed into the cafeteria Dolce Peccati in Tower Road in Tas-Sliema, using a rental car.

Three persons who were sitting in the cafeteria were slightly injured, and extensive damage was done to the shop window. 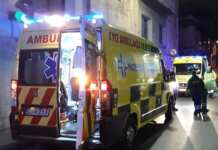 In court, the accused pled guilty to the accusations. Magistrate Natasha Galea Sciberras condemned him to a sentence of six months in prison, suspended by two years. The man was given six months to pay the sum of €33,096 to Dolce Peccati Limited for the damage caused. His driving license was disqualified for a year.

The Prosecution was led by Inspector Leeroy Balzan. The defendant was represented by Dr Mark Mifsud Cutajar whilst Dr Alfred Abela represented the company.