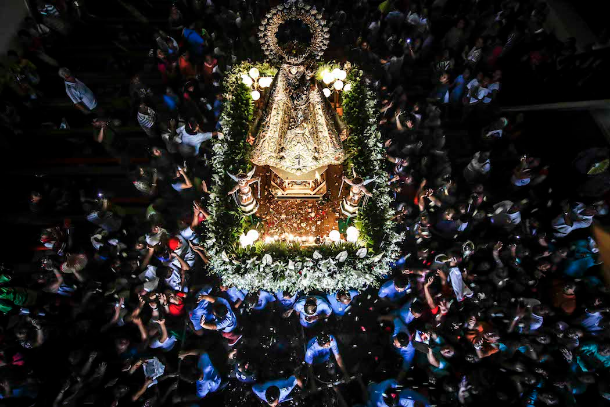 In the Philippines, President Rodrigo Duterte on Wednesday signed a bill declaring the  September8 Feast of the Nativity of the Blessed Virgin Mary a “national special working holiday.”

It marks the second time Duterte has declared a Marian feast as a national holiday in the Philippines, following his 2017 declaration of the Dec. 8 feast of the Immaculate Conception as a special working holiday.

There has always been a special link between the Philippines and the Virgin Mary, and in September 1942 Pope Pius XII declared Mary as the principal patroness of the nation.

According to the Manila Times, at the time Duterte described Mary as being “selfless” in accepting the invitation to be the mother of Jesus “so that the plan of salvation be realized.”

Duterte, who claims to have been molested by a priest in the 1950s and who has often had harsh words for the country’s bishops, called Mary “the epitome of faith and source of inspiration” for many Christians, especially during difficult times.

Since he took office in 2016, Duterte has been critical of church leaders in the Philippines, primarily over their condemnation of his crackdown on the drug trade, which has left thousands of people dead in extrajudicial killings, as well as his efforts to reintroduce the death penalty.

Catholics in the country have often been the targets of inflammatory comments made by Duterte, who in the past has said the country’s bishops are “fools” who are “good for nothing.” At one point he called abuser priests “sons of bitches,” and threatened to kill them.

One of the oldest Marian feast days on the Catholic liturgical calendar, the Nativity of Mary commemorates Mary’s birth. Though scripture itself does not speak of Mary’s birth, the oldest account is believed to come from a 2nd century apocryphal text. It has been celebrated by Catholics as early as the 6th century.

According to the Manila Times, the bill passed the Senate May 20 and was signed by Duterte August 8, but it was not released until Wednesday.

In a possible sign of the tensions between Duterte and Catholic bishops in the Philippines, the bill has been widely covered in mainstream media in the country, but there has been surprisingly little reaction from the bishops.

Few articles announcing the news have been published on Catholic news sites in the country, and there has been no statement from the bishops’ conference or its president, Archbishop Romulo Valles of Davao.

However, according to UCAnews, Father Melvin Castro, chancellor for the Diocese of Tarlac, praised Duterte’s decision, saying the new Marian holiday is a “cause for joy.”

The declaration of the feast as a national holiday “recognizes the importance of religious and spiritual celebrations,” he said, voicing hope that the Sept. 8 celebration will inspire people “to emulate and imitate the virtues of Our Lady.”