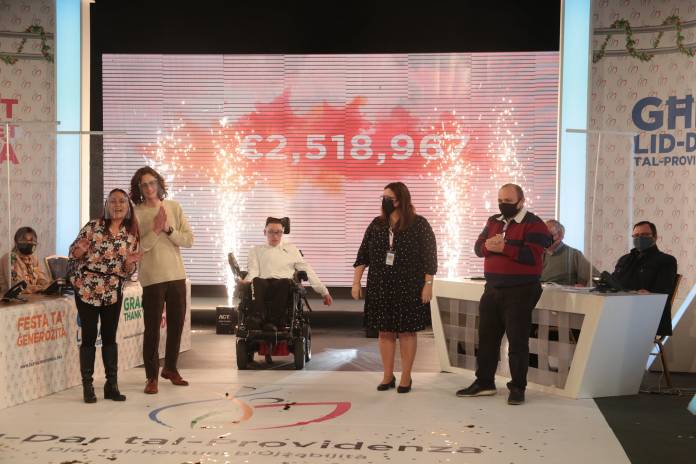 Id-Dar tal-Providenza (DTP), in a statement, thanked the general public for its outstanding generosity in the annual Festa ta’ Ġenerożità fundraising marathon organised on New Year’s Day. Added that all donations and pledges above €10,000 are vetted; a process which also applies to the €500,000 bumper pledge by Catco Group Capital investment which was fronted by former PN leader, Adrian Delia.

This year’s annual Festa ta’ Ġenerosita’ raided a record of €2.5 million; donation which was described by DTP as “the lifeline support which the Home needs for it to continue providing professional services to the residents especially during these trying times.”

Dar tal-Providenza said that in line with approved policies of the Archdiocese of Malta, all cash donations above €5,000 and all other donations and pledges above €10,000 from individuals and companies are subject to a vetting process.

The statement continued that as part of this process, and also in conformity with regulatory requirements, id-Dar tal-Providenza requested further documentation following the pledge of €500,000 by Catco Group Capital Investment. Id-Dar tal-Providenza does not only rely on documentation provided but conducts its own verification process before accepting such donations. Acceptance of the donation is subject to the Home’s internal verification process, the statement concluded.

Newsbook.com.mt is reliably informed that Saturday morning Dar tal-Providenza was presented with the “due diligence” report which was prepared for RSM Malta on Fisal Abdullah Alokla, chairman, CEO and shareholder of Catco Group Capital Investment. The report was made before Alokla, a politically exposed person holding a Syrian passport was permitted to open a bank account in Malta.

Alokla was born in Aleppo, Syria. He has shareholding and directorships in a number of companies doing business in investment, construction, oil and gas, energy, manufacturing, automotive and sports industries. These are based in China, Tunisia, and Malta.