Amnesty International has launched the world’s biggest human rights campaign, “Write for Rights” with Malta making up one of the 10 cases where justice is being sought.

Amnesty International is calling on the Attorney General to drop the charges against the El Hiblu 1 youths.

El Hiblu 1, an oil tanker, had rescued approximately 114 persons from a sinking rubber boat. The ship captain promised safety in Europe. However, as time passed, the people on board realised they were being taken back to Libya instead. Three youths acted as interpreters for the captain and crew, so as to calm the situation aboard, and the ship captain decided to turn back towards Malta. Before arriving in Malta, the Armed Forces stormed the ship and arrested the three boys for allegedly hijacking the boat.

Amnesty International is demanding justice for the “El Hiblu 3” and calling on the Attorney General to drop the charges against the youths (now aged 21, 18 and 16) and close the case before trial. 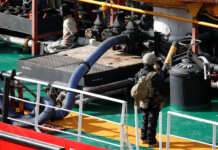 Researcher at Amnesty International, Elisa de Pieri, stated that ship captains have a legal duty to rescue those in danger at sea and take them to a safe destination, when Libya is not a safe destination. The experiences refugees and migrants face there are arbitrary detention, torture, rape and exploitation.

Write for Rights is a campaign that mobilises people around the world to write letters on behalf of people who need urgent help.

Nigerian teenager Moses Akatugba was arrested and sentenced to death when he was 15 years old, after being accused of stealing three phones. In 2019, he was released, after 800,000 Amnesty International supporters showed their support.

“I was on death row because the police claimed I stole three phones,” says Moses. “But now I’m free, because people like you wrote letters to support me. After eight years in jail, and 800,000 letters from Amnesty International supporters all over the world, I was released. Those letters kept my fire burning. I am alive today because of these letters. So your letters can save a life.”

You can find out more about the campaign here.

MAY: Hiblu 3 charges should be dropped