Maltese President George Vella has called on the community to not forget those who have been left unemployed due to the repercussions of the COVID-19 pandemic.

The President was addressing a ceremony held under his auspices by the Minister within the Office of the Prime Minister Carmelo Abela, and during which the winners of the National Workers of the Year Awards 2020 were announced.

“Let us continue to work together, as a united country, so that all those who lost their job can find employment as soon as possible, find their place back in the workforce, and enjoy once again the dignity that employment provides”, the President appealed.

In a statement, the President thanked the authorities concerned and the employers for ensuring, in these extraordinary circumstances, to protect all their workers in accordance with the advice of the health authorities, including by using telework where possible. He also expressed great appreciation for the fact that trade unions and employers’ associations are also being recognised.

President Vella encouraged employers to continue investing in “the most important resource that our country has to offer”: the worker. He called for the continued recognition of those workers who, daily and without seeking any recognition, add value to their work while introducing new practices in order to improve the quality of their work.

Three workers and four organisations were honoured during the National Workers of the Year 2020 ceremony held at the Mediterranean Conference Centre by Minister within the Office of the Prime Minister Carmelo Abela, under the distinguished patronage of the President of Malta George Vella.

The National Worker of the Year Award was given to Rodry Ann Maria Celeste, an ICT Support Officer within the Ministry for Finance. Miss Celeste worked with a commitment which goes beyond normal duties and in a professional manner helped to speed up public service processes.

The awards:
3 workers, 4 organisations honoured in worker of the year ceremony 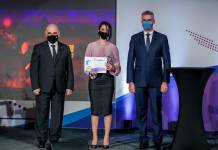