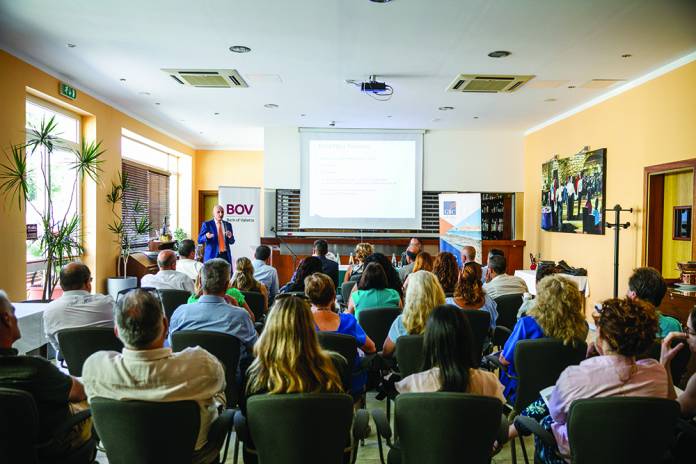 ‘Tax Incentives – Corporate and Personal Pensions’ was the theme of an information session recently organised by Bank of Valletta in collaboration with the Gozo Business Chamber.

In her opening address, Vicky Xuereb, Director General Strategy and Support from the Ministry for Gozo, said that the issue of corporate pensions is of critical importance within an island region which is characterised by an ageing population where life expectancy is increasing.  Gozo has a higher concentration of older persons which is above that of the national average.  She continued that there is huge potential for corporate pensions tailored to suit the specific needs of Gozo.  In light of the special circumstances that characterise socio-economic development within Gozo, there is the need to create incentives to make occupational pensions attractive.

David Spiteri Gingell, leading the ĠEMMA financial education campaign led by the Ministry for the Family, Children’s Rights, and Social Solidarity, explained in detail the Pension Framework, voluntary occupational retirement schemes and financial education for employees.  He spoke about the costs of losing an employee, which go beyond recruitment and training costs, saying that a good solid Voluntary Occupational Retirement Scheme can be a strategic tool for companies to retain employees.

Mario Farrugia, Head Bancassurance from Bank of Valletta, discussed tax incentives on the setting up of Corporate and Personal Pensions. He said that most people put their mind at rest thinking that being home owners is enough, as this makes them asset rich.  While this is a good thing in itself, similar to a business venture, they would require liquidity to meet the day-to-day expenses and ultimately live comfortably upon retirement.  Farrugia stressed on the importance of changing the mind-set about pension plans and encouraged participants, both on a personal and a corporate basis to delve deeper into the subject and benefit from incentives while preparing themselves and their employees for the future.

Joseph Borg, President, Gozo Business Chamber concluded the session by thanking ‘Bank of Valletta’ for their support.  While highlighting the upcoming events for the coming months Joseph Borg commented how the Chamber has been of service to its members for the last 20 years, having been set up in December 1999.  He commended all those who throughout these years gave up their time on a voluntary basis to sustain its efforts.

Watch: “Professional women still have obstacles in their way” –...