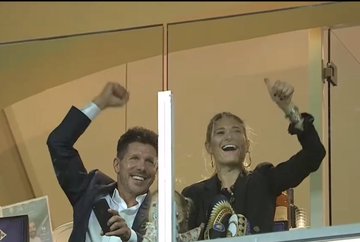 Fiorentina beat Chievo Verona 6-1 and Giovanni Simeone got on the scoresheet in the 93rd minute. Stefano Pioli’s team provided a constant attacking threat and registered 12 shots on target.

Giovanni Simeone could be seen saluting his father Diego after the final whistle. The Atletico Madrid coach was watching his son together with his wife Carla Pereyra and two-year old daughter Francesca. The 23-year-old striker arrived in Italy two years ago and impressed in his first and only season at Genoa by scoring 12 goals, including a brace against Juventus. He joined Fiorentina last year for approximately €15m and went on to score 14 Serie A goals.