In a post on Facebook Arrigo said he already met with the newly elected PN leader and as from tomorrow, as a new parliamentary season starts, he said he is sure the PN will be “continually surprised as the government’s wrong doing will be unveiled weekly if not daily.”

Robert Arrigo said that the clarity of the vote taken on Saturday gives the PN a new leader, the 5th leader in his long years of service to the party. 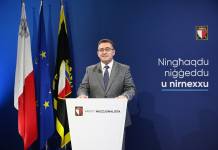 He also stated that the next general election will be crucial as the PN must see that the 2/3 majority by PL is not attained.

Arrigo stated that as deputy leader, he will remain until the end of his tenure ‘as duty calls till the last day.’