11:11 Thank you for following us.
Amy Borg
11:11 The next court sitting will be held on Friday at 9:30 am. Minister Owen Bonnici is expected to testify.
Amy Borg
11:09 Minister Fearne's testimony ends here.
Amy Borg
11:06 "Any Minister who wished to speak to Muscat, he made himself available after the cabinet meetings which used to be held on Tuesday," said Fearne

The board asks if Muscat had ever discussed with him the murder of Daphne Caruana Galizia.

Fearne says that Muscat had told him that this was the worst thing that could have happened to his administration.
Amy Borg
11:05 Minister Fearne confirms.
Amy Borg
11:03 Lawyer Jason Azzopardi mentioned how Daphne Caruana Galizia had published a side letter that it is supposed to remain secret and is usually not made available to Parliament or the public.
Amy Borg
11:03 Minister Fearne says he was not informed about this by Konrad Mizzi.
Amy Borg
11:02 Fearne said that he was informed by Vitals that Konrad Mizzi had waived €9 million on the hospital's concession deal.
Amy Borg
10:58 "After there was a change of ownership it was concluded that Vitals was not honouring its role and for me that was unacceptable. A few days after I had received a letter from Vitals regarding the bank guarantee. At the time there were negotiations between Mizzi and Steward Healthcare to see how they would go about it," explained Minister Fearne.
Amy Borg
10:58 Asked about the bank guarantee to Vitals, Fearne is explaining certain technical details.
Amy Borg
10:56 He confirms that he used to communicate with Keith Schembri and Joseph Muscat on Whats-app but there was never a group chat between the 3 of them.
Amy Borg
10:54 "I never communicated with Yorgen Fenech and I was not aware that he was close to certain people in the administration and the government," said Fearne.
Amy Borg
10:52 Asked when he was informed that a general election was to take place in June 2017, Fearne says that he was informed when it was made public.
Amy Borg
10:51 Lawyer Jason Azzopardi is now asking questions.
Amy Borg
10:47 Prior to Daphne's murder do you think that the freedom of expression was under threat in Malta? asked Comodini Cachia

"Whoever killed her is definitely a criminal and I think that the aim of the mastermind/s was also to warn other journalists to be careful what they write and/or publish" – said Fearne.
Amy Borg
10:46 "If I had to see Karl Cini I do not think I would recognise him" – Fearne.
Amy Borg
10:46 Chris Fearne also says that he never met Yorgen Fenech and never saw Brian Tonna or Karl Cini at Castille.
Amy Borg
10:44 "When I had asked him to give me an explanation regarding his links to Libya, Gafa refused and I immediately terminated his role within the Ministry for Health," further explained Fearne.
Amy Borg
10:41 Comodini Cachia is asking questions on the role of Neville Gafa. Fearne said that Mizzi had given him a post within the FMS.

"As soon as I was Minister for Health I received communication that Gafa was in some way or another involved in the Medical Visas scandal and I immediately terminated his role within the Ministry for Health," said Fearne.

"Gafa was not reporting to me anymore, he eventually had an office at Castille but do not know what role he occupied," continued saying Fearne.
Amy Borg
10:39 Fearne said that as Minister for Health he appointed a committee to analyze if Vitals is in line with the KPIs.
Amy Borg
10:38 When you were Minister responsible for Health and therefore took over Mizzi's work did you ask for due diligence? asked Comodini Cachia
Amy Borg
10:37 Lawyer Therese Comodini Cachia is asking questions on the RFP process regarding the Vitals agreement.
Amy Borg
10:35 Fearne also said that the MOU which includes the government data, he never accessed it.
Amy Borg
10:32 "Until today I have never seen the MOUs signed with the Vitals, I never asked for a copy. There are 2 MOUs. The MOU that was handed to the NAO, I had asked for a copy but the NAO said that he would like not to publish it," said Fearne.
Amy Borg
10:32 Lawyer Therese Comodini Cachia is asking questions on the Vitals project.
Amy Borg
10:29 The board also mentions that Fearne had voted in favour of Konrad Mizzi in a no-confidence vote in Mizzi.

"That was a very strange situation as the motion was presented by Marlene Farrugia and the Parliamentary Group followed the instructions of the Whip who at the time was Godfrey Farrugia," said Fearne.
Amy Borg
10:28 The board notes how their resignation was too late as in the meantime all was business as usual and that has created a sense of impunity which led people to do what they did which led to Daphne's assassination.
Amy Borg
10:24 As Minister what was your position when it was revealed that 17 Black belonged to Yorgen Fenech and that Mizzi and Schembri were to receive money in their Panama Accounts from 17 Black? asked Comodini Cachia.

Minister Fearne said that it is not up to the Cabinet to investigate and expects the authorities to take the necessary measures as he awaits the final reports of the inquiries.

He also mentioned that following all the allegations the Prime Minister and the Chief of Staff resigned.
Amy Borg
10:23 At the time there seemed to be no link to Konrad Mizzi's Panama Account to the projects he was responsible for, said Fearne.
Amy Borg
10:19 Do you think that political responsibility was shouldered at the right time? asked Comodini Cachia

"Political responsibility was shouldered. There was a general election and Konrad Mizzi was re-elected," replied Fearne.
Amy Borg
10:19 Lawyer Therese Comodini Cachia is now asking questions.
Amy Borg
10:17 Fearne confirms that he was never informed regarding reports by the FIAU or any other authority on the Dubai secret company, 17 Black.
Amy Borg
10:14 My relationship with Keith Schembri started deteriorating as I was under the impression that he was working against me getting re-elected.
Amy Borg
10:12 The board asks where he was when Daphne Caruana Galizia was murdered. Fearne replies that he was invited to participate in a programme on the Labour Party's media.
Amy Borg
10:10 Fearne said that he did not agree with the way the role of the Chief of Staff has evolved during the years given the fact that he is not elected by the people and the amount of power the position holds.
Amy Borg
10:08 "PM Muscat had spoken to all cabinet members, one by one, on the issue," said Fearne.

Since I was Parliamentary Secretary for Health, my discussion with Muscat was primarily about Konrad Mizzi. Regarding Keith Schembri Muscat was not going to take any action and that he will remain his chief of staff, further explained Fearne.
Amy Borg
10:06 Regarding the Panama Papers, there were discussions with the then Prime Minister Joseph Muscat.

Fearne said that he was informed that Mizzi will not keep his post as Minister for Energy and Health after the Panama Papers were issued.

The board notes how despite this Konrad Mizzi remained responsible for the most controversial projects.
Amy Borg
10:04 The board is mentioning the list of projects which have created doubts;

The AUM University
The Vitals project
The power station project
Amy Borg
10:02 "The reason given by the government that all the projects were concentrated under the responsibility of one person, was that Konrad Mizzi will deliver and that there should be continuity," explained Chris Fearne.
Amy Borg
10:00 "Were you aware of a kitchen cabinet?" asked the board.

I was not aware that there was a kitchen cabinet, said Fearne.

He again stated that he was not involved in the whole process as at that time he was not a Minister.
Amy Borg
09:39 The board is asking on the projects related to selling of 3 hospitals in Malta and Gozo.

Fearne says that he was not involved in the 2013 electoral manifest. He also said that until 2014 he was a parliamentary secretary for health.
Amy Borg
09:37 The board is asking Fearne about his political career.

He said that after the 2008 election he decided to contest the 2013 general election.
Amy Borg
09:37 Minister Chris Fearne takes the witness stand.
Amy Borg
09:35 Lawyer Therese Commodini Cachia who represents the Caruana Galizia family said that the Prime Minister should only interfere in the public inquiry to grant an extension only.
Amy Borg
09:34 The board of inquiry is chaired by Judge Emeritus Michael Mallia and composed of Chief Justice Emeritus Joseph Said Pullicino and Madame Justice Abigail Lofaro.
Amy Borg
09:33 Deputy PM Chris Fearne is already present inside the courtroom.
Amy Borg
09:32 The board of inquiry has just entered the courtroom.
Amy Borg
09:25 We are live from courtroom 20.
Amy Borg
09:25 Good morning and welcome to this live blog.
Amy Borg
Testimony of former Deputy PM Louis Grech
‘The chief of staff has power that goes beyond his role’ – Former Deputy PM 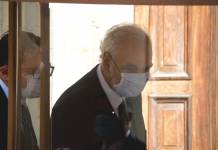