The Court of Appeal has ruled that Opposition Leader Adrian Delia is to be given a copy of the Egrant report.

On Monday, Chief Justice Joseph Azzopardi said that Delia should be given a copy of the Egrant inquiry report.

The First Hall of the Civil Court had turned down a request by Delia to be granted access to the full copy of the report. The decision was handed down by Mr Justice Robert Mangion. Delia then appealed the decision. 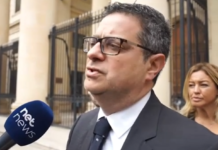 The main conclusions of the Egrant inquiry report were made public once the inquest led by then-Magistrate Aaron Bugeja was concluded. Despite, promises that the Egrant report would be made eventually public, to date only the main conclusions were published from the 1,500-page report. The inquiry while it did not find evidence that Egrant belonged to Prime Minister Joseph Muscat or his wife Michelle Muscat, it did not even establish to whom Egrant belongs.

During the press conference, Delia said that a country cannot be deemed democratic if the Attorney General was found to be in breach of the Constitution by the country’s highest court. He noted that the AG’s role is to defend the Constitution.

When asked if the Court has limited the public’s right to information, Delia said that the Court did not stop him from publishing the Egrant inquiry report.

Delia flanked by MPs Mario De Marco, Karol Aquilina, Jason Azzopardi and party Secretary General and MP Clyde Puli together with his legal representatives Andre Portelli, Janice Chetcuti and Errol Cutajar went to the Attorney General’s Office in Valletta to demand a copy of the report. 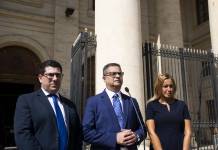