However, the committee made clear, in a statement issued tonight, that at no point did it decide not to allow Delia to enter the Mellieħa PN club tomorrow.

According to sources speaking to this newsroom, the sectional committee discussed the upcoming political activity on Thursday, and decided to send a letter to the PN leadership – including Delia – urging him to postpone the event. But the political activity still continued to be advertised on social media – including on Delia’s Facebook page – and in Saturday’s edition of the party’s newspaper In-Nazzjon.

The sources had said that the decision to urge Delia to postpone the activity was made in light of the ongoing leadership crisis which has led to a number of senior PN members resign their post. They said that it did not make sense to organise a political activity in which the PN criticised Prime Minister Robert Abela while its own leadership was beset by problems.

Delia’s decision to appear on TV talk show Xarabank also angered the same sources, who objected to his using the media to disseminate his message instead of seeking to resolve the issue internally.

Meanwhile, Delia was on the party radio station on Saturday morning saying that the party could not be held hostage to one person or a group of people but belonged to its paid up members. 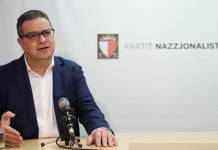