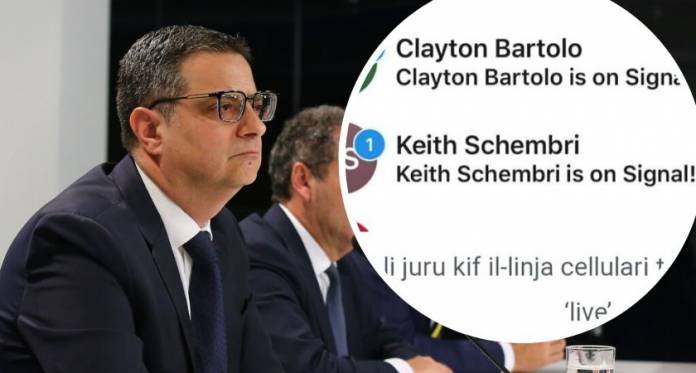 Yesterday evening Net News publish a screenshot taken from the app Signal which shows that a number listed as that of Keith Schembri joined the app. Allegedly, Schembri joined at 6.44pm. PL MP Clayton Bartolo allegedly also joined at the exact same time. The screenshot didn’t show a date.

It’s possible that Keith Schembri is using a new sim card linked to his old number.

Keith Schembri’s missing mobile was the subject of much controversy.

Schembri was briefly detained in connection with Daphne Caruana Galizia’s murder. He was released without a charge. Schembri told police that he didn’t know where his phone was when they demanded to see it.

Candidate for Partit Laburista (PL) Leader Robert Abela said that he does not believe that the former Chief of Staff of the Prime Minister, Keith Schembri, has lost his phone. This was stated while he was being questioned during the television programme ‘Xarabank’.Ministru ta’ Malta.

According to its Google Play page, Signal says it’s used by millions of people every day for free and instantaneous communication anywhere in the world.

“Send and receive high-fidelity messages, participate in HD voice/video calls, and explore a growing set of new features that help you stay connected. Signal’s advanced privacy-preserving technology is always enabled, so you can focus on sharing the moments that matter with the people who matter to you.”