The Planning Authority has postponed a decision on a project being proposed for Naxxar on the former trade fair grounds.

The application provides for the development consists of several towers of 13 storeys each, comprising of 113 residential units as well as a commercial development on the former trade fair grounds in Naxxar.

The project has been recommended for approval, with the NGO lambasting the recommendation as a “total failure of our planning system and the authorities administering it”. 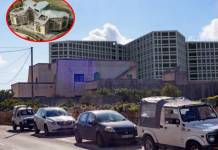 The project has been met with resistance by non-governmental organisations and residents alike.

During the sitting on Thursday, the Planning Authority board chairman Vince Cassar asked the developers if they are willing to change plans due to the opposition to the project.

The developer argued that the board could either approve the project as it is being proposed or have new plans drawn up of a development which would look like a government housing estate.

Moviment Graffitti and Flimkien ghal Ambjent Ahjar were also present for the hearing, with FAA issuing a statement following the board meeting.

The NGOs pointed to the shortcomings of the Traffic Impact Assessment which found no serious long-term impacts, when the Social Impact Statement asserted that the traffic impact would be unhealthy for residents.

FAA representative Astrid Vella maintained that this project should not even have been considered since it violates the parameters of medium-rise buildings which cannot be located on ridges over 25m above sea level, when this site is 126m high, a point that PA Board Chairman Vince Cassar agreed to.

Vella also emphasised the Superintendent of Cultural Heritage points that “the proposal’s major impacts will affect views and vista from Mdina and San Pawl Il-Baħar, in relation to the urban skylines of Mosta and Naxxar, currently dominated by the respective Parish Churches. The proposal will permanently and undeniably reconfigure the visual appearance of the most prominent urban centres of the central-north area, proposing a massive solid block which is not taking into consideration the traditional and Maltese skyline.”

Moviment Graffiti reiterated its calls for the unequivocal rejection of the proposed mega-development which is clearly out of proportion with its surroundings, will rob residents and visitors of much-needed open spaces, and will also lead to an immediate and steep decline in the quality of life. Residents argued that the area needs to be planned holistically, in view of several other projects that are planned for the area. Indeed, at one point different developers’ architects and lawyers started arguing between themselves for their right – to ruin the area.

NGO representative Annick Bonello raised the importance of the area as an archaeological zone, arguing that it was not right that Malta’s heritage be sacrificed to another commercial project. She pointed to the fact that this development abuts on the Naxxar Urban Core and several scheduled buildings, including the windmill and Palazzo Parisio, asserting that the visual impact photo from the Palazzo’s garden underplayed the project’s visual impact.