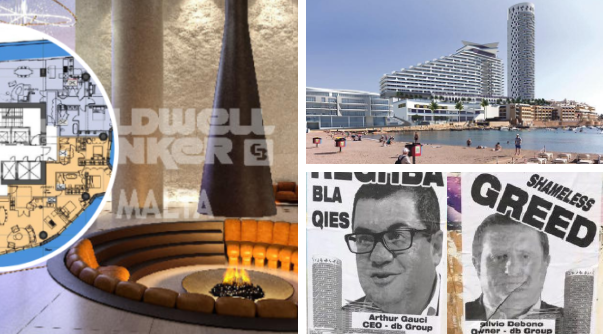 DB Group is set to rake in millions just from the sale of real estate while the taxpayer has, so far had to foot the bill for the sale of prime land at a giveaway price, flying in a PA Board member for a vote and the possible construction of a tunnel to ease traffic problems which this project is going to exacerbate. This information comes hot on the heels of yesterday’s exclusive revelations by Newsbook.com.mt that a PA board member was taxied in by private jet just for the vote on this project.

The estate agency Coldwell Banker, in the past few days, advertised the sale of apartments which range from €7.6 million to over €10 million. The apartments, a whole of 880 sqm, are advertised as being in a block of 99 units. Simple mathematics at the conservative rate of €7.6 per unit yields €752 million while at €10 million yields €990 million. This income between 50-60 times the initial outlay and excludes the profits to be accrued from the Hard Rock Hotel, the proposed Casino and assorted shopping malls and lido.

This by far supersedes the estimates which a study by KPMG had forecast for the project. A study by this company of auditors, was quoted in the media as saying that the forecast income for the first three years for the sale of apartments was to be in the region of €123 million. By January, a good nine months prior to the PA sitting which was to determine the acceptability of the project, DB Group had already started sales with whole floors going for, what people in the industry described to Newsbook.com.mt as ‘a very, very, reasonable price’ of €7million.

The project is spread over 24 tumoli of land adjacent to a Special Area of Conservation which harbours several endemic species. The project will involve extensive excavation.