The impromptu memorial to Daphne Caruana Galizia at the foot of the Great Siege monument is back after it was cleared ahead of Victory Day celebrations on Friday.

Pressure group Occupy Justice explained that the photos, placards and candles were placed to the side. The activists reinstated the protest memorial on Saturday.

A photograph uploaded on Facebook by Repubblika executive committee member Alessandra Dee Crespo confirmed that the monument has been cleared, while a number of chairs have been set up in the square in preparation for the official event.

The activist said that the irony was not lost on “our genius Prime Minister,” stating that Abela was ignoring the fact that Malta was once again under siege as a result of “corruption, impunity and the cover-up of the state-sponsored assassination of the journalist who exposed it all.” She added that Malta was also under siege through the “continuity,” Abela pledged when he succeeded Joseph Muscat.

But she concluded on a defiant note, insisting that “we will celebrate victory over this siege too. In this very spot. It’s a matter of time.”

On Friday
Government clears Daphne memorial ahead of Victory Day 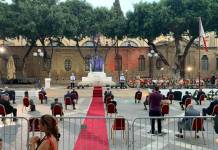 The impromptu memorial at the foot of the monument had first emerged in the wake of Daphne’s death, but was being routinely cleared: it was ultimately confirmed that it was being cleared by workers from the Cleansing and Maintenance Division, which fell under the political responsibility of then-Justice Minister Owen Bonnici.

Undeterred, activists would set up the memorial within hours, launching a daily cat-and-mouse game that lasted until Abela was sworn in.

Repubblika filed a constitutional case against Bonnici and the Court had ruled in their favour, finding the minister guilty of breaching their human rights. But Abela ignored calls to dismiss Bonnici, retaining him in his cabinet, albeit with a different portfolio.