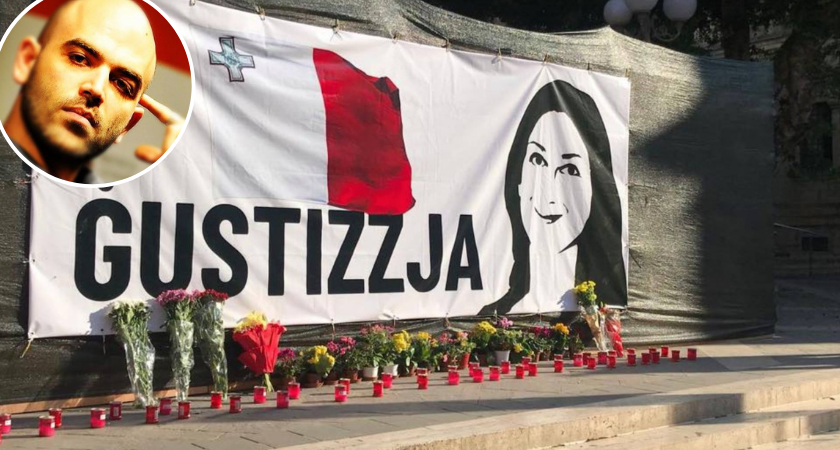 “Remembering that Daphne was killed for her investigations and that the masterminds are still at large” has irritated someone, anti-mafia journalist Roberto Saviano has said on Twitter.

Saviano tweeted a photo of the walled Great Siege monument, where activists have kept a memorial for the investigative journalist Daphne Caruana Galizia since her assassination, with the newly installed banner.

Saviano explained how the banner was guarded 24 hours a day by Occupy Justice activists following its removal by government workers, saying that someone was irritated at the fact that the memorial is a physical reminder that the mastermind was still at large.

In a longer post on Facebook, Saviano commented that Caruana Galizia keeps on being tormented even in her death. He detailed how the memorial for the assassinated journalist is kept alive by the activists, since it keeps being cleared. He also referred to the latest incident which involved government employees removing a banner with Daphne’s face and the word “justice” on it within hours after it was installed over the hoarding installed for “restoration works”.

Quoting Giovanni Falcone, the Italian Magistrate who was killed by the mafia, Roberto Saviano ended his post saying ‘men pass away; however ideas remain and continue to ‘walk on’ in other people’. He remarked that activists like Occupy Justice and others, were not only commemorating Daphne’s memory but continuing to keep her legacy alive.

A renowned Italian journalist, Saviano is known for his literature and investigative reporting which show the inner workings of the Camorra mafia-type organisation and its business. He was placed under a strict security protocol following death threats in 2006. He was then placed under police protection. Saviano writes for the Italian newspaper La Republica, The Washington Post and The Guardian among others. He wrote the book Gomorrah which was later turned into a series.

Monique Agius   March 25, 2020
In two separate warnings, the Malta Financial Services Authority warned against Coinmalex, an entity that purports to operate from an address in Malta and claims to "offer trust assets management of the highest quality on the basis of profitable CryptoCurrency trading through Crypto exchanges".

Charmaine Attard   March 26, 2020
Bank of Valletta is introducing other measures aimed at assisting and supporting personal customers during these unprecedented times due to COVID-19.