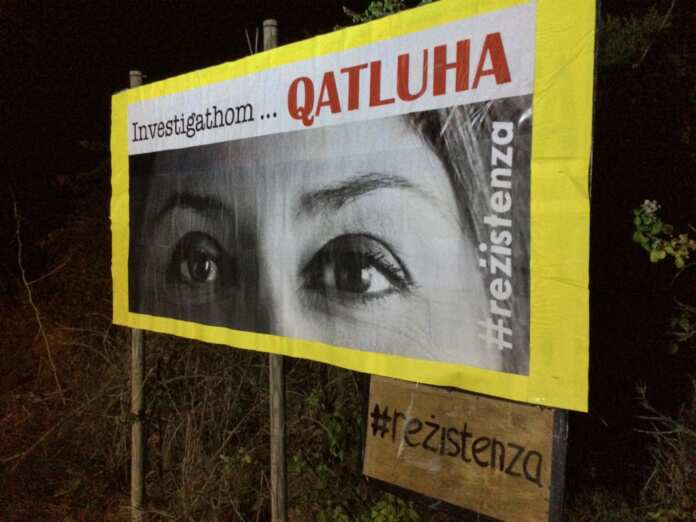 Three new banners have been placed by activist group Reżistenza over night in Bidnija, Sliema and Valletta, respectively. The banners carry a shot of assassinated journalist Daphne Caruana Galizia’s eyes with the words “[Daphne] investigated them. They killed her”. In a statement accompanying the photos, Reżistenza said that as far as the investigation was concerned up to now, no politician has been questioned or investigated by the Police in order to establish the identity of the mastermind behind her assassination.

One of the locations chosen for the banner, was precisely the wooden boards which were erected yesterday few hours away after the President of Malta Marie Louise Coleiro Preca laid her wreath on Victory Day at the Great Siege Monument. The monument is symbolic for activists as it hosted the makeshift memorial dedicated to the assassinated journalist demanding justice. Reżistenza said in their statement that the wooden wall would not discourage them but consider it as proof that the authorities intend to keep fighting against Caruana Galizia even after her death.

Reżistenza reiterated that the most logical step would have been to establish the motive behind the journalist’s murder.

Furthermore the group asked whether the Police obtained, analysed and conserved all form of communication data relating to the individuals who were investigated by Caruana Galizia over the past years.

A call to investigate who commissioned the murder echoed Reżistenza’s previous statements.