The public inquiry into the assassination of Daphne Caruana Galizia was scheduled to continue on Wednesday morning, but the sitting was deferred to another day.

It was Foreign Minister Evarist Bartolo’s turn to testify in the inquiry, which seeks to determine whether the authorities could have prevented the journalist’s death.

The former spokesman of former prime minister Joseph Muscat, Kurt Farrugia, testified in the last sitting. Farrugia was subsequently appointed CEO of Malta Enterprise by Muscat, a position he holds to this day.

Farrugia would check with Mizzi and Schembri before releasing government statements 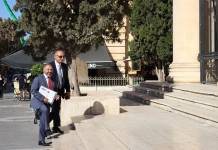 The board of inquiry is led by retired judge Michael Mallia, accompanied by former Chief Justice Joseph Said Pullicino and judge Abigail Lofaro.