The public inquiry looking into the assassination of journalist Daphne Caruana Galizia resumed on Wednesday morning with a brief sitting, in which the testimony of journalist Victor Paul Borg was heard.

Borg’s testimony was cut short after some 30 minutes, as his request for it to continue behind closed doors was turned down by the board of inquiry. Instead, the inquiry asked him to submit an affidavit, promising confidentiality.

The journalist had worked extensively in Malta and overseas, but said that he was compelled to resume investigative journalism in Malta after Caruana Galizia was killed.

Citing his own experiences, he observed that journalists seeking to expose wrongdoing were often left alone, as the authorities would fail to follow things up. Consequently, he argued, eliminating a journalist was an easy way to put an end to investigations.

The inquiry resumes on Friday with the testimony of Kurt Farrugia, who had been spokesman to former PM Joseph Muscat before he was made CEO of Malta Enterprise.

10:14 Today's sitting ends here, and so does our live blog. Thank you for following us.
John Paul Cordina
10:11 Kurt Farrugia – a former spokesman for PM Joseph Muscat who was made CEO of Malta Enterprise – will be testifying on Friday.

Foreign Minister Evarist Bartolo is scheduled to testify, but the inquiry is informed that he will not be able to do so then.
John Paul Cordina
10:07 Borg is asked to submit an affidavit.

He states that he has a number of recommendations to make concerning the protection of journalists.

His testimony ends here.
John Paul Cordina
10:05 Lofaro asks whether he knew Daphne and whether he was aware of any threats she received. He states that he had sent her a few articles between 2012 and 2013.

Lofaro then asks whether he would bring up issues related to Daphne's own security concerns and whether she ever complained to him about them. Borg says that she never did, though she had complained about the behaviour of some politicians.
John Paul Cordina
10:04 The inquiry board appears unconvinced by this request, however. As a solution, it asks Borg to submit the testimony he wished to make in writing, emphasising that this would remain confidential.
John Paul Cordina
10:03 Borg now asks to continue his testimony behind closed doors.

Asked why he wished to do so, he states that he wishes to speak on security matters which he did not wish to discuss publicly.
John Paul Cordina
10:02 Borg argues that he was seeing parallels between what had happened to Daphne in the past and what he was going through in the present.

He states that his work is ignored by local media, while partisan media singled him out for attacks.
John Paul Cordina
10:01 Retired judge Michael Mallia asks Borg whether he had any concrete facts to present to the Court.
John Paul Cordina
09:59 Borg emphasises that when a journalist is left alone, that it is easy to eliminate just one person.

He argues that if the inquiry is seeking to determine what the state should do to protect journalists, one must consider the difficulties that they face.
John Paul Cordina
09:58 Borg was pointing out that the life of a journalist was a difficult one as one risked being isolated and losing access, whilst receiving inadequate pay.
John Paul Cordina
09:57 The inquiry board, however, questions the relevance of the matters Borg brings up on a number of matters, including as Borg is about to mention how journalists are underpaid.
John Paul Cordina
09:56 Borg brings up another case where a spokesman for the Prime Minister asked him to refrain from publishing an article for a few days.

The spokesman threatened to ignore any questions Borg would make in the future should the article be published.
John Paul Cordina
09:52 Borg continues, explaining that whenever journalists' revelations are not followed up by proper investigations, the journalist is left alone to look into wrongdoing.

Consequently, he adds, all one needs to do to put an end to investigations is to stop or eliminate the journalist.
John Paul Cordina
09:52 The board reminds Borg that it was not in its remit to look into the functioning of the Planning Authority.
John Paul Cordina
09:47 Borg states that he will limit his testimony to investigations that he has concluded, starting with his research into a property. He had found that false declarations had been made by the original owner.

As a journalist, he looked into the matter, but the Planning Authority's response was that it never received any assertion proving his claim.
John Paul Cordina
09:45 Borg starts by providing some background, stating that he started working as a journalist at the age of 18. He has worked in Malta, but has also spent 17 years working overseas, in the UK, Australia, Thailand and China. He said that he worked as a freelancer and that his work has been published across the world.

Proceedings are taking place at Hall 20 in the Law Courts, where the Constitutional Court holds its sittings.
John Paul Cordina

Last week’s sitting saw the testimony of Assistant Commissioner Ian Abdilla, the former head of the Economic Crimes Unit. Abdilla was only recently removed from the post by newly-appointed commissioner Angelo Gafà, with Alexandra Mamo appointed in his stead. 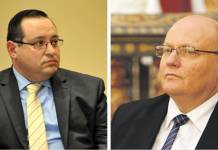