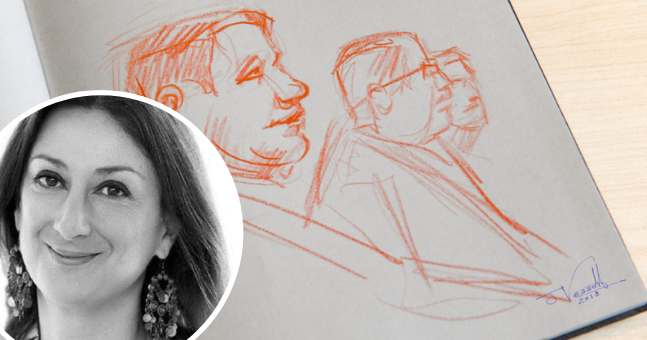 The three men accused of the assassination of journalist Daphne Caruana Galizia are currently in court as witnesses continue to testify.

During the last compilation of evidence, the Court heard how the journalist’s body was identified after a DNA test with forensic expert Mario Scerri.

Daphne Caruana Galizia was assassinated in a car bomb on the 16th October 2017 near her residence in Bidnija. Three men are being accused of her murder – Alfred Degorgio known as “il-Fulu”, his brother George Degiorgio known as “iċ-Ċiniz” and Vince Muscat known as “il-Koħħu”.

The prosecution requested certain videos of the boat, Maya, belonging to one of the accused, which are in the possession of Transport Malta, as it wished to analyse the footage and confirm that the boat seen departing and arriving in the video of the 16th October was the same as that of the 22nd November.

Experts Keith Cutajar and Captain Lanfranco have been appointed for this analysis.

Inspector Charles Casha, who took DNA samples and squabs from Alfred Degiorgio and George Degiorgio without knowledge of the reason behind it. He testifies that George Degiorgio had refused to sign the declaration and also said that evidence has been given to Europol but that there still more to be transferred to them.

The defense argued that the Netherlands expert, Doris Eerhart was not appointed by the Court and that her report about the burnt mobile found should be removed as evidence. The lawyer for the family Caruana Galizia objected this request since it should go through the Criminal Court in a separate case. The Magistrate declined the family lawyer’s request since the Court is entrusted to collect the evidence.

The evidence includes photos from Europol, material collected from the street of the crime scene, pieces of wire, paper bags, pieces of material from the explosion and pieces of the car amongst others.

A live blog is being compiled here.