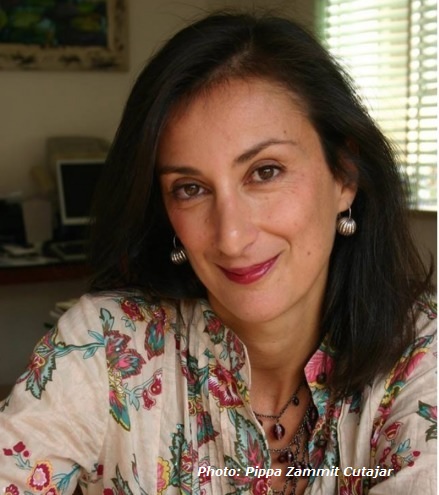 The 2020 Allard Prize for International Integrity has been co-awarded to Daphne Caruana Galizia.

“Receiving the Allard Prize for International Integrity on behalf of our mother, Daphne Caruana Galizia is both humbling and encouraging,” commented the family of the slain journalist. “It not only recognises her work in exposing corruption and defending the public’s right to know, but it also recognises that Daphne should be celebrated for everyone’s sake because her example of courage, integrity and humour in the face of adversity are so badly needed today and will be for many years to come,” they added.

The family said that the financial part of the award will be dedicated to the objectives of the Daphne Caruana Galizia Foundation “ensuring full justice for Daphne and the guardianship of her work; protecting investigative journalists and ending impunity for the murder of journalists; supporting independent, non-partisan media; and supporting public interest litigation and access to justice. We hope that the honour itself will inspire those who have taken up Daphne’s work to never give up and that it will encourage others to take up the fight against corruption and abuse of power” commented the family.

Peter Allard, the founder of the Allard Prize for International Integrity, said: “We are honoured to present the 2020 Allard Prize jointly to Daphne Caruana Galizia and Howard Wilkinson, in recognition of their leadership and commitment to protecting human rights and combatting corruption,” said Peter Allard. “Their stories of integrity and courage inspire all of us to effect positive change in pursuit of a more just and transparent world.”

About the Allard Prize for International Integrity

Established in October 2012 and funded by Mr. Peter A. Allard, Q.C. through The Allard Prize Foundation, the Allard Prize for International Integrity is awarded to an individual, group or organization that has demonstrated exceptional leadership and courage in the protection of human rights, while upholding the Rule of Law, promoting transparency and/or preventing or combating corruption.