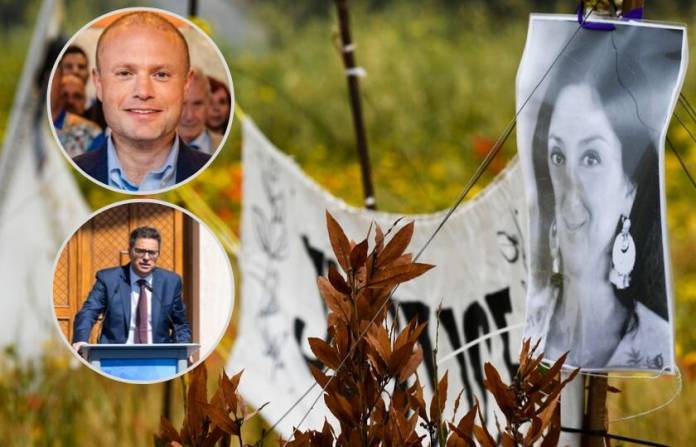 The Sunday Times of Malta story about the assassination of journalist Daphne Caruana Galizia, has dominated the news today. The news has also been addressed in two different ways by the two main political party leaders.

While Nationalist leader Adrian Delia suggested that the Government always tries to cover up, the Prime Minister and leader of the Labour Party Joseph Muscat, has answered with silence.

Speaking on the PN station Net TV earlier today, Delia said that journalists are always trying to seek the truth while the government is always trying to cover up. He said that almost two years after the assassination, we are no farther to finding who ordered the murder and no one had taken political responsibility.

He explained that his party had requested an independent inquiry two years ago while the Government didn’t commit.

Delia added that the Council of Europe had already rebuked the government’s efforts to set one up because it was not the independent one they had hoped for.

According to Delia, the government is more interested in breaking the memorial to Daphne Caruana Galizia at the Great Siege Monument in Valletta.

‘This is something that goes against the foundations of democracy and free expression,’ said Delia.

During a political event organised by the Labour Party, the Prime Minister spoke about the economy, construction and medical cannabis, topics already discussed extensively in previous events. The Times story was not mentioned despite it having just been issued.

What was revealed today?

According to The Sunday Times of Malta, a businessman was identified as one of three people whom are suspected of being the mastermind behind the assassination of journalist Daphne Caruana Galizia. The newspaper quoted two sources close to the investigation.

The rapporteur for the Council of Europe, Pieter Omtzigt questioned the effectiveness of the inquiry through a series of questions pinpointing everything from the potential connections with key figures in government and the Attorney’s General’s gathering of evidence.

Staff Reporter   August 13, 2020
Due to the current circumstances and the directives issued by the Health Authorities to prevent the spread of COVID-19, this year’s edition of Rockestra will not take place.