Migration, health and travelling were amongst the themes discussed by MEPs David Casa and Miriam Dalli in an online press conference.

The discussion was held in the midst of the coronavirus pandemic.

MEP David Casa commented on how they were surprised that they were able to produce so much work from home. He said that everything can be done from home. He also spoke about the several measures adopted by Parliament to help the communities, including chauffeur service for the nurses and doctors in Brussels, Luxembourg and Strasbourg. Casa mentioned a number of activities which had to be postponed due to the pandemic.

Both MEP Casa and MEP Dalli agreed that the European institutions could have taken decisions in a more immediate manner at the start of the pandemic. Dalli stated that the EU cannot be solely focused on the vaccine.

A plan which guarantees access to medicine beyond the pandemic – Dalli

Miriam Dalli explained that the Socialists & Democrats Group within the European Parliament approved of a health coordination plan which guarantees access to medicine for countries, including Malta. She said that this system extends beyond the pandemic and suggested that the storing of medicine for rare diseases be coordinated amongst the EU countries.

Dalli expressed her wish that access to medicine be coordinated in an equal way amongst countries.

Asked if there is a solidarity crisis between the Northern European and Southern European countries which were affected worse by the pandemic, both MEPs said that solidarity should be shown through action.

Dalli said that there should have been an agreement for help to be given to countries which have been affected worse by the pandemic. Had this been done, stated Dalli, Malta would have received more help with regards to migration. She also said that Malta’s decision to back out of Operation Irini was the best decision which could have been taken given the circumstances.

Regarding migration, David Casa said that since Malta is a member of the EU, it has the right to ask for European solidarity, however it is also obliged to save migrants.

Casa stated that the European Parliament always sided with Malta regarding migration. He reminded the journalists that together with former MEP Louis Grech, he had proposed a motion for there to be a permanent solidarity solution about migration. The EP had unanimously agreed in favour of Malta’s plea. 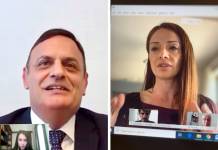 Should the EU provide money to airlines because of ticket refunds?

Answering this question, Casa said that the EU’s resources should be used to help those who are most in need.

Should masks be given to everyone for free?

In her answer to this question, Dalli said that we should always follow Prof. Charmaine Gauci’s guidelines.

Will journalists receive money from the EU?

Asked about the help the European Union can provide for journalists, David Casa stated that he understands that newsrooms are suffering from financial problems. He said that there should be a mechanism which helps newsrooms gain some sort of funds. This proposal was presented to the European Commission last week, said Casa.