Bernard Grech called for the resignation or dismissal of Parliamentary Secretary Rosianne Cutajar following allegations in today’s edition of The Sunday Times of Malta of carrying business with Yorgen Fenech, accused of the assassination of Daphne Caruana Galizia.

“These are individuals in government that believe that they can do whatever they like and carry business and build close relationships with persons implicated in murders as if nothing is wrong” said Dr Grech.

According to a front page story in The Sunday Times of Malta the Parliamentary Secretary served as a middleperson in a property deal involving Yorgen Fenech. She allegedly received in cash €46,500 as a brokerage fee to arrange the sale of a €3.1m Mdina property to Fenech. The paper also said that the sum was not included in the declaration of assets that Cutajar made to Parliament.

In a comment on Facebook, Cutajar wrote that she always acted correctly both legally, ethically and politically.

The leader of the Partit Nazzjonalista said that Cutajar, as government representative, should focus on her job instead of doing business with people, she knew owned 17 Black.

Grech also spoke about the statement of  Finance Minister Clyde Caruana who is calling for a new policy for Maltese workforce, Grech reminder the Minister that when he was still head of Jobs Plus he was the architect of the policy in favour of the mass importation of foreign workers.

“Now he is realising the damage he caused” Grech said.

Bernard Grech concluded the interview with a message of unity for Christmas. “We need to keep in mind that Jesus came to this world for everyone without distinction” he said. 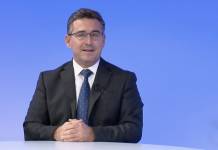