Statistics tabled in Parliament and circulated in a statement by Malta Customs show that in the last 5 years Malta Customs seized €110 million worth of drugs amounting to over 17,500kgs. These included interceptions of large quantities of cocaine, cannabis resin and, increasingly, heroin transported by sea.

The Maltese authority also noted an increase in the use of sophisticated intermodal containers where the narcotics were hidden. Malta Customs said that it is working with other EU counterparts on suspicions that logistical supply chains shipping routes and large ports have been infiltrated by organised criminal organisations. 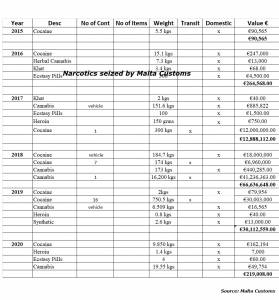 Over €87 million worth of counterfeit goods seized by Customs