The Criminal Court will appoint an administrator to oversee the companies owned by disgraced former OPM chief of staff Keith Schembri, the Court said in a decision on Monday morning.

Companies belonging to Schembri had their assets frozen on 21 September after a court issued an attachment order listing 91 people and companies. The list include Schembri and his family as well as business partners, Nexia BT, Brian Tonna and his relatives and partners at Nexia BT, among others.

The attachment order came days after the conclusion of a magisterial inquiry into whether Schembri took a €100,000 kickback on passport sales. The inquiry was based on a leaked FIAU report.

Schembri had contested the garnishee order, arguing that his business would suffer greatly and that the asset freeze would result in “catastrophic” effects on his business. This would in turn have an impact on his employees and their families, he pleaded.

On 24 September a court application was filed requesting the Criminal Court to nominate an administrator to oversee the companies so that they may continue functioning. The court had denied the request saying that Article 4 of the Prevention of Money Laundering Act was silent on having the administrator appointed by the Criminal Court. The court had said that this lacuna in the law cannot be filled in by the court. 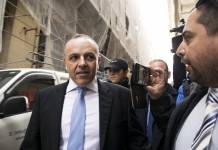 On 2 October, the plaintiffs had filed constitutional proceedings claiming that Article 4 did not provide an ordinary remedy for a person who has been subjected to an investigation and seizure order, to be able to contest such order.

Under two weeks later, on 14 October, the First Hall of the Civil Court in its Constitutional jurisdiction upheld the request for an interim relief measure, granting Schembri and the State Advocate two days within which to name an administrator or administrators.

On 30 October, the State Advocate had appealed this decision on procedural grounds, arguing amongst other things that a precautionary warrant is meant to stop someone from doing something and not to force them to do something.

The State Advocate said that Schembri had also not proven any real or imminent danger of irreparable damages.

The State Advocate had also argued that the court of first instance had placed the administrator under its authority, but had completely excluded the Criminal Court.

It was however noted that the State Advocate had given no explanation as to how the appointment of an administrator would interfere with police investigation, as had been alleged.

The Court said that in its opinion the Criminal Court has to appoint an administrator who would oversee the companies, adding that after all the Criminal Court had upheld the request for an investigation and seizure order after concluding that there were sufficient reasons to issue such order. On the other hand, the First Hall of the Civil Court is limited in its jurisdiction to decide on an application on this case.

The rest of the appeal was rejected.