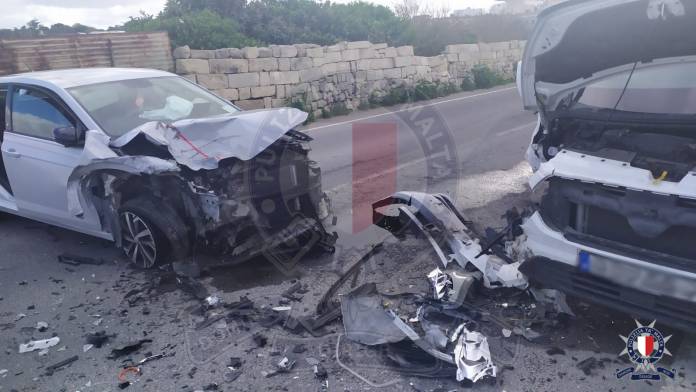 Early this afternoon, four persons, including a one-year-old girl, were involved in a traffic accident in Rabat Road, the road leading to Dingli, at approximately 12:30pm.

The Civil Protection Department had to be called to assist a person trapped in a car wreck.

A car, driven by a 48-year-old woman resident of Rabat and a van driven by a 33-year-old man from Gżira crashed into each other in a head-on collision.

A 25-year-old woman and a one-year-old baby were passengers in the car driven by the 48-year-old woman. Due to the collision, a person was trapped in the vehicle and had to be assisted by members of the Civil Protection Department who were also called to the scene.

All those involved in the accident were taken by ambulance to Mater Dei Hospital. The baby was certified to have suffered slight injuries.

The 48-year-old woman was later certified to have suffered grievous injuries while the other three people suffered minor injuries.

18 cars set on fire in Gudja