Social Solidarity minister Michael Falzon announced that benefits for individuals with disabilities who had to stay home because vulnerable will be stopped immediately and assistance to parents who had to suspend their employment to take care of their children will stop on July 3 after lockdown measures were lifted by the Prime Minister.

He explained that the parents’ benefit will be paid until July 03 when skolasajf and childcare centres will reopen.

Those whose employment was terminated because of COVID-19 will be paid until the end of the month.

Watch: Over 8,000 requests for benefits submitted 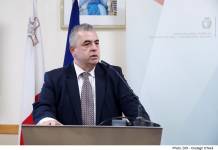 Falzon revealed that the number of applications for these benefits went down over the past week, dropping by 711 from 8,360 with workers already returning to their workplaces. He said that Government had forked out some €13.2million to 8,360 beneficiaries over four months. This is expected to go up to €17.5million by the end of June.