As EU member states received their first doses of the Pfizer-BioNTech, more cases of the UK virus variant were reported in European countries, with the latest being Sweden and Switzerland. The new infections have been linked to people who had recently travelled from the UK.

Spain has reported its first four cases of the coronavirus variant first isolated in the UK which appears to have a higher infection rate.

The infections – all in Madrid – were linked to recent UK travel, the regional deputy health chief said, adding that the confirmed cases involved three relatives of a man who flew from the UK on Thursday.

None of the patients were seriously ill.

The UK variant has been detected in France, Denmark, the Netherlands and Italy. The latter has reported nine new infections caused by the variant – six in Naples and three in Veneto.

To date, it has not been detected in Malta. 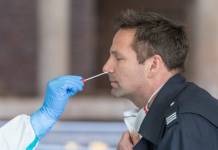