A new European Asylum Support Office (EASO) Special Report highlights that the risk of Covid-19 taking hold in lower-income countries, as well as leading to more insecurity, could result in increases in asylum applications in the medium term.

The Special Report examines the impact of the Covid-19 outbreak on current and potential future asylum trends. The information used in the report is valid as of 7th May 2020 and follows data published on 30th April 2020 which shows a dramatic 43% decline in asylum applications in the EU+ in March.

The report finds that, following the outbreak of Covid-19, which is disproportionately concentrated in the developed world, travel bans and other emergency measures have almost completely eliminated the number of asylum applications being lodged in the EU+.

The analysis shows that the countries that implemented the most emergency measures in March also had the largest drop in applications. Available data seems to suggest that low and lower middle-income countries may be at higher risk of latent Covid-19 outbreaks. The main countries of origin of applicants for asylum in the EU+ have medium to high vulnerability to hazards (including infections) and suffer from a lack of coping capacity. Similarly, the main countries of origin also have far fewer hospital beds and medical doctors per capita. Combined with lacking access to handwashing facilities, crowded living conditions and low levels of literacy, the risk of destabilising effects resulting from Covid-19 outbreaks have the potential to affect future asylum trends.

A press release by EASO says that at the same time, the suspension of global coalition operations across the Middle East has left a power gap that ISIS is looking to exploit. The Asylum Support Office said, “In the interests of early warning and preparedness, national asylum and reception authorities should reflect upon the medium to high risk that the outbreak will eventually take hold in lower income countries which are historically the source of most asylum seekers in the EU+.  In turn, indirect (such as a resurgence of ISIS) and direct consequences (famine, conflict and security risks) of the virus might affect asylum-related migration to the EU+, and contribute the most to new applications or the reception population.”

Malta has seen a large number of migrants head for its shores in the past few weeks. There are currently two Captain Morgan ships which migrants are being quarantined on.

Yesterday, in a letter addressed to Prime Minister Robert Abela, European Commissioner Dunja Mijatovic urged the Maltese Government to fully meet its human rights obligations towards migrants, including asylum seekers and refugees, who cross the Mediterranean to reach Europe. 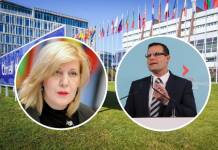 The U.S. registers the deadliest day since start of Covid-19 outbreak