“We are writing to share our disappointment at today’s court ruling by a Maltese court in the criminal proceedings against Neville Gafà for threats he made on Twitter against Italian journalist Nello Scavo” said Faith Miyandazi, Head of Communications, from the European Centre for Press and Media Freedom (ECPMF) in a reaction to Tuesday’s ruling.

ECPMF, said that the acquittal is nothing less than an injustice on Scavo. “In failing to recognise how journalists are pressured and intimidated, it is also a disappointment for everyone who considers that receiving threats and insults should not be a routine “part of the job” for journalists.”

The case hails back to a Tweet made in June 2020 by the former-OPM person of trust Neville Gafa telling Scavo “Stop your dirty business. If not, we will stop you.” The comment was made on a post by the humanitarian NGO Alarm Phone. The journalist had immediately asked on Twitter at whom the threat was directed, and who the “we” was referring to in Gafà’s tweet.

The Court presided by Magistrate Charmaine Galea ruled that there was insufficient evidence and that the comment was more a political comment than a threat. 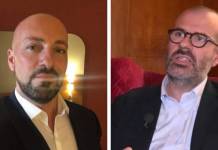 ECPMF noted the worrying trend across Europe. Since March 2020, 173 alerts on Mapping Media Freedom in 26 EU member states and candidate countries pertain to harassment and psychological abuse directed at journalists and media workers due to their work.

“In addition to increasing the risk of physical violence, these threats can encourage journalists to step back from their work and avoid sensitive but necessary avenues of investigation and reporting” concluded the Head of Communications for ECPMF.

Scavo, in his first comment following the judgement said, “These legal proceedings have allowed me to get to know at first hand the reality in which journalists in Malta live and the climate of continual tension they live in and the constant belittling of the work they do.”

The Italian journalist has been following ground-breaking stories on tacit pushbacks into Libyan concentration camps on aspiring migrants from all over the African continent. In his research, published on L’AVVENIRE and worked both independently and in collaboration with THE NEW YORK TIMES and THE GUARDIAN, Scavo has uncovered a system which punishes humanity for the sake of legality.

The journalist who has been given police protection in Italy because of threats by the Mafia said that he “will not stop in my support of my Maltese colleagues who have bravely taken on the mantle from the works of Daphne Caruana Galizia and who fight to keep her memory alive.”