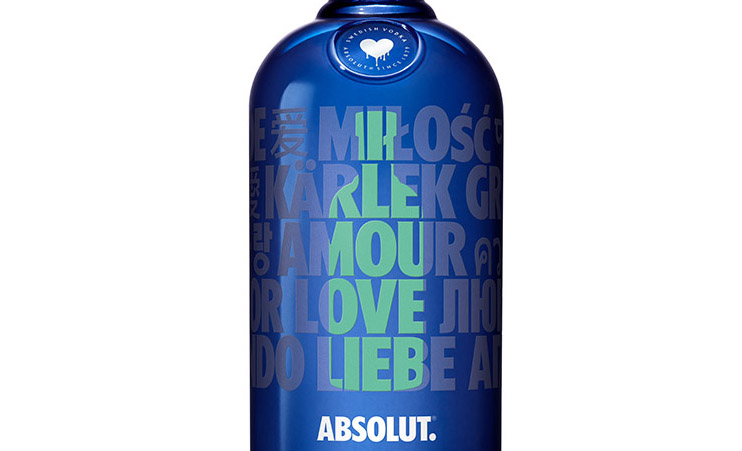 Love is the most powerful force in the world. This is why Absolut’s latest campaign celebrates the power that love has to create a more open world and make a real difference to people’s lives, especially in places where hate-speech and intolerance is widespread.

This was the inspiration behind the Absolut Drop limited edition bottle. The bottle design contains ink taken from hate signs around the world and repurposed to spread a message that radiates positivity. Absolut travelled to racist and anti-LGBTQ protests, collected hate signs, extracted the ink and reused the ink to create the mint and pink Absolut bottle outlines printed on the limited-edition bottles. The bottle design also has the word love in multiple languages showing that love has no borders. Ink is not the only element that has been repurposed, as the bottle has also been made using 70% recycled glass including recycled glass from previous limited-edition bottles.

is incredibly important to us,” commented Gaia Gilardini, Absolut Brand Director, Communications & Channel Marketing, “we’re dedicated to creating a more open world and we are excited to reveal Absolut Drop that is the ultimate expression of this purpose. By bringing people together with a message of love, we can create a sign of solidarity and together drive positive change to create a brighter and more open world.”

This message transcends borders and shows that everyone has the power to turn hate into love and spread a better message. No matter how small an action, everyone can make a difference.

This campaign is part of Absolut’s ongoing brand platform, Create a Better Tomorrow, Tonight. Absolut believes in building a more open world by using creativity to drive positive change. With Absolut Drop a more open world starts with a drop of love.

Absolut Drop limited edition bottle will be available to purchase in two colourways starting from November 2018.

Absolut is imported, marketed and distributed by Farsons Beverage Imports Company (FBIC) Limited, a member of the Farsons Group.

Christmas concert for Farsons Group employees and their families