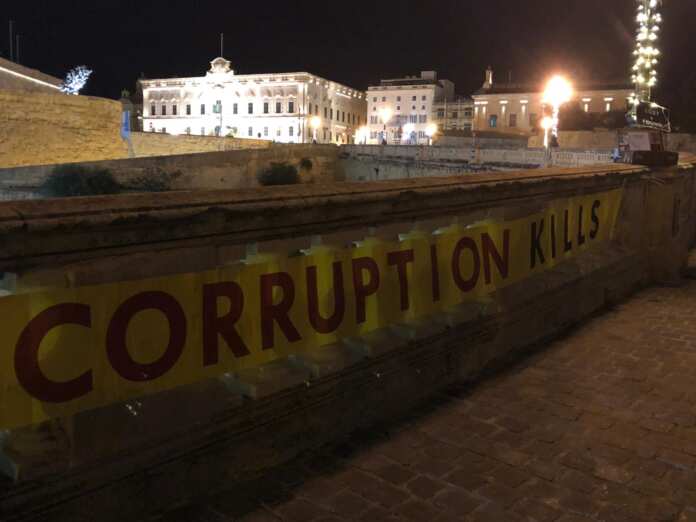 Reżistenza activists have put up new banners around Floriana and Valletta saying “corruption kills”, as well as a suit case full of fake money and a Maltese passport inside.

In a statement, they condemned politicians who are corrupt, rather than working towards protecting the citizens, adding that they will never forgive them for it.

Reżistenza also said that many people are against corruption, but only a few actually fight against it because it might be more worth their while if they don’t. At this point they mentioned the politicians who, instead of acting like public servants, “they are promoters of accomplices in acts of corruption”. They added that these people’s place is in jail.

They also mentioned those people who don’t comment because they’ll be benefiting from little favours, and the activists also condemned these people because they are also accomplices.

This morning #Valletta & #Floriana. Politicians are paid from public funds to promote the common good. Instead, many #Malta politicians are promoters of #corruption. To these we say that we shall never forget the damage they’re doing to our #nation. Their place is in jail. pic.twitter.com/PPM2Vw28fi

Migrants protest for their freedom at Ħal Safi detention centre

“Eight months is all we have” – Muscat and EU politicians