Police were called in at St Joseph’s Home for the elderly in Fgura when a man who has both of his parents and his sister residing at the said turned up at its reception asking for further information about their health.

Mario Mifsud popularly known as Dj Banana has shared his experience with Newsbook.com.mt. His elderly parents and his sister who has cerebral palsy are residing at the home and share the same room. His mother and his sister are among the residents who have tested positive for coronavirus. Mifsud explained that the family only got to know after his sister called the residence.

Coronavirus has erupted in nursing homes with a total of 117 cases being reported last week on Friday by Superintendent of Public Health Professor Charmaine Gauci during the weekly press conference. St Joseph’s Home for the elderly has been the worst affected.

Speaking to this newsroom, Mifsud explained that on Sunday he turned up at the home to obtain more information about their condition. Instead of getting the desired update, the management called the police and alleged he threatened them. Mifsud explained that the nurse in charge at the time was ordered by the police to update him on the situation. He was promised a call by the manager which until the time of the interview on Monday, did not happen.

Mifsud highlighted that despite the protocols being implemented at the elderly care homes, relatives of residents are still being kept in the dark about the situation. He explained that while his father had not tested positive for the virus, he wanted to remain in the same room with the wife and daughter. Mifsud underlined that his father is terrified but could not leave the other family members alone.

He explained that other relatives of residents were also informed when they called the home that their loved ones had contracted the virus.

Mifsud noted that initially swab tests were not carried out routinely on all patients, saying that after the first resident having tested positive, it was only his sister who was swabbed for the novel virus.

Over the past few days, swab tests have been carried out more frequently, Mifsud remarked.

Declare a state of emergency

Mifsud underlined that the government should declare a state of emergency at the privately owned care home and take over its operations.

“Something went wrong at the home,” he said, adding that the government should intervene and send its own doctors and nurses to bring the situation under control. At present, the home is operating on skeleton staff, he remarked.

Parnis would have been better off spending money on PPEs

Mifsud noted that the home was not equipped as a hospital and lacked the necessary resources to treat patients adequately.

He also feared that health care workers who are working at the home could have been a source of transmission, since residents are confined to their rooms.

A separate source who had spoken to this newsroom had also highlighted the lack of personal protective equipment for the staff at the home. 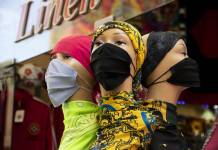 Two individuals who were positive to coronavirus have died on Monday.

In the daily infographic, the health authorities said that one of the 32 cases reported on Sunday belonged to the St Joseph’s Home cluster.

Questions have been sent to the health authorities.