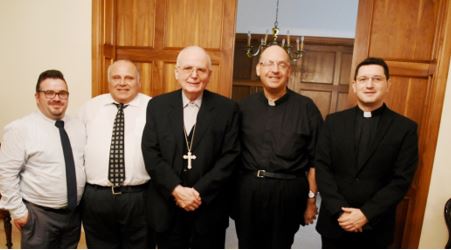 A delegation from the JP2 Foundation recently made a cordial visit to His Excellency Archbishop Monsignor Alessandro D’Errico, Apostolic Nuncio to Malta at the Apostolic Nunciature in Tal-Virtu’, Rabat, Malta.

As part of the introduction, the delegation informed the Apostolic Nuncio as to the aim of the Foundation as well as its role in connection with Saint John Paul II.  Apart from the fact that the Foundation is to keep alive the name of Pope John Paul II, its primary aim is to promote ‘culture’ through collaboration in projects and initiatives which bring together persons of different identities and diverse cultures to create an environment for a common denominator. These initiatives include – but are by no means limited to – the cultural field.

The main subject of the agenda was the commemoration of the first centenary from the birth of Karol Józef Wojtyła and the 30th anniversary of him, as the first Pontiff, to visit the the Maltese Islands, both dates coinciding in May 2020.  The delegation explained that at the moment, the Foundation is preparing a proposed program which will cover a period of 24 months beginning from May 2019 to May 2021.

This year, the JP2 Foundation has organised 20 events, 15 of which with international participation and five locally based.

“Solidarity with thousands of officers who carry out their duties with dedication and honesty”...

Monique Agius   February 16, 2020
In a statement published on Facebook, the MPA reacted to the probe into the overtime racket which saw some 40 traffic police officers arrested.

Jesmond Saliba   February 17, 2020
These are the main stories covered by Malta's newspapers in their front-pages.