The St Teresa Church and Priory in Cospicua has been placed under quarantine after one of its resident friars returned from a trip to Italy.

The friar, a Maltese national, had returned to Malta a few days ago, and put himself in self-quarantine in line with the recommendations of the health authorities. In light of the circumstances, his fellow friars have followed suit.

Newsbook.com.mt is informed that at present, three friars live in the 17th century monastery, which is run by the Malta Province of the Order of Discalced Carmelites.

Earlier today, Prime Minister Robert Abela announced that quarantine is now mandatory for people returning from countries where coronavirus cases have been reported. Those who break quarantine may incur a €1,000 fine.

The Malta Archdiocese and the Gozo Diocese have also issued a circular, stating that people had a moral obligations to follow the health authorities recommendations in a bid to prevent the spread of the virus. 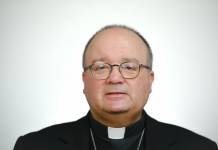 Elderly home speaks out for the first time since the coronavirus...