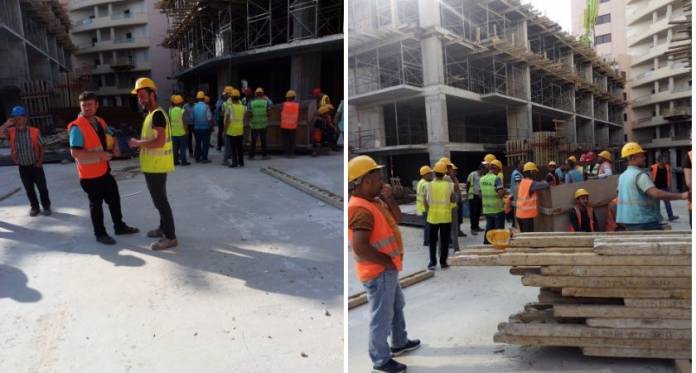 A group of around 80 construction workers have not been paid for some four months prompting them to strike, as they demanded their wage.

The Turkish workers who were recruited by an international construction company to work on the Fortina project have claimed that they have received no payment for their services for the past four months.

A construction worker employed with TACA speaking to Newsbook.com.mt explained that the workers who are entitled to €1,250 work from Monday to Saturday, eleven hours a day.

The construction worker explained that some workers had been striking over their salary for some fifteen days. The employees were then told that they would be paid on Tuesday, however, this did not materialise in the end.

The worker explained that they lived in a hotel when asked about their living conditions.

The company had hit the headlines when it was revealed that it had plans to house its workers inside a prefabricated “container village” in a quarry outside Mqabba.

He explained that all that they wanted to do was to get paid and return to Turkey.

The workers were flown in after the Turkish company won a bid to work on the redevelopment of Fortina Hotel in Sliema.

Fortina investments distances itself from TACA

Fortina investment issued a statement distancing itself from TACA construction. In its statement, the company said that the employees in questions were employed with the Turkish company and not Fortina.

“Fortina Contracting Ltd, a fully owned subsidiary of Fortina Investments, has honoured and is in line with all its financial obligations to Taca Construction for the approved civil works undertaken on the development to date, and is very disappointed that the Turkish company has allegedly not paid its workers the wages that are due to them,” the statement reads.

It added that the situation was being treated as serious and that everything was being done to ensure that their rights are safeguarded.