International concern about the spread of coronavirus outside China grew on Sunday with sharp rises in infections in South Korea, Italy and Iran.

In Italy, officials said a third person infected with the flu-like virus had died, while the number of cases jumped to above 150 from just three before Friday.

Authorities sealed off the worst affected towns and banned public gatherings in much of the north, including halting the carnival in Venice, where there were two cases, to try to contain the biggest outbreak in Europe.

“I was surprised by this explosion of cases,” Prime Minister Giuseppe Conte told state broadcaster RAI, warning that the numbers would likely rise in the coming days. “We will do everything we can to contain the contagion.”

Italian health authorities were struggling to find out how the virus started. “If we cannot find ‘patient zero’ then it means the virus is even more ubiquitous than we thought,” said Luca Zaia, the regional governor of the wealthy Veneto region.

Almost a dozen towns in Lombardy and Veneto with a combined population of some 50,000 have effectively been placed under quarantine.

The European Union said it had confidence in the Italian authorities. “We share concern for possible contagion (but) there is no need to panic,” the bloc’s Economic Affairs Commissioner Paolo Gentiloni told reporters.

Austria on Sunday evening lifted a brief ban on trains traveling to and from Italy via a key international route. The block was imposed after two possible cases of the new coronavirus were discovered on board a train heading from Venice, Italy to Munich, in Germany. Austria had halted some train connections on Sunday evening at the Brenner pass with Italy, after officials reported that two passengers who were possibly infected with the coronavirus had been stopped.

The two passengers who were exhibiting symptoms were believed to be two German women. The spokesperson said the two women were isolated from other passengers in a section of the train.

Austrian Interior Minister Karl Nehammer said that officials would meet on Monday to discuss whether Austria should re-establish border controls with Italy.

Trains will travel according to their normal schedules on Monday morning, the company added.

The two passengers, while feverish, have since tested negative for the COVID-19 virus, Austria’s interior ministry said. 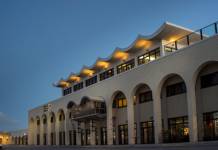