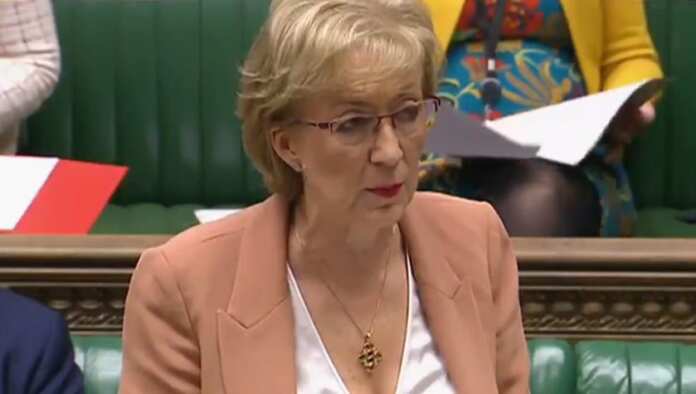 The Commons Leader Andrea Leadsom has decided to resign from the UK Prime Minister’s cabinet tonight over differences over Brexit.

Leadsom’s decision to quit, comes at a time when a number of Conservative MPs have expressed their disdain for the current handling of the Brexit withdrawal.

According to Cabinet Ministers speaking to the BBC, they have said that it is time for the Prime Minister to go. One is reported to say that it’s ‘the end of the line.’

It is understood that the Home Secretary Sajid Javid to have been one of them.

There are reports that these two Ministers are strong contenders for the leadership.

The news of Leadsom’s departure comes just over a day after the Prime Minister outlined a series of concessions in the shape of guarantees, assurances and legal obligations within the Withdrawal Agreement Bill to help it cross the line with MPs. This would be the fourth occasion that MPs had to vote on the deal.

Reactions towards the updated bill have been hostile from Brexiteer Conservatives and opposing parties, many of whom have voiced their decision to vote it down once again.

Had Leadsom stayed on, she would’ve been the Minister delivering the Bill to Parliament.

This makes her the 21st Minister to leave their post in protest over the handling of Brexit, the 36th under May’s administration.

It is with great regret and a heavy heart that I have decided to resign from the Government. pic.twitter.com/f2SOXkaqmH

In the resignation letter to the Prime Minister, Mrs Leadsom said that in her opinion, ‘the UK would be a truly sovereign United Kingdom through the deal that is now proposed’

Worst still, she considered a second referendum as being ‘dangerously divisive,’ forcing her to oppose the government’s decision to be, ‘willingly facilitating such a concession.’

The possibility of a second referendum would, ‘risk undermining our Union which is something I passionately want to see strengthened’

Mrs Leadsom concludes her letter by calling on the Prime Minister to, ‘make the right decisions in the interests of the country, the government and our party.’

You can read the full resignation letter here

While technically the Prime Minister cannot face a challenge over her leadership for the next 12 months, there are rumours of a meeting of the 1922 Committee of Backbench Conservatives to try and change this rule.

Mrs May is understood to have already set up a timetable for a new successor to take the reins following the vote on the Withdrawal Agreement Bill. This is so far been put down as the 7th June.