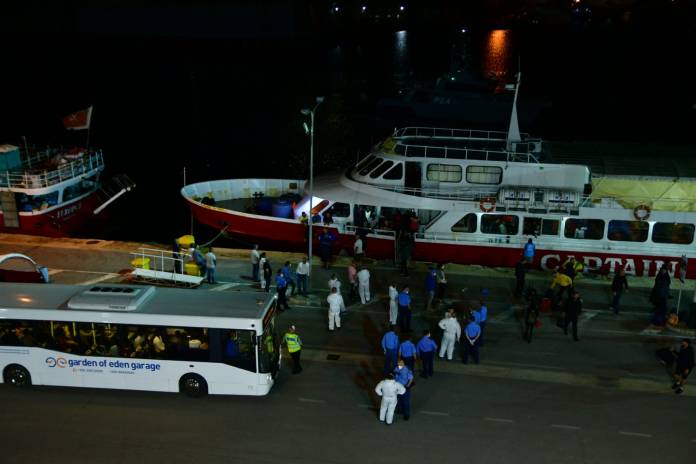 ‘Closing ports and detaining people on pleasure boats is not in line with our values,’ German MEP Lena Dupont from the European People’s Party on Monday during the Civil Liberties Committee (LIBE) debate on the Central Mediterranean migration route in times of the coronavirus pandemic.

Dupont was referring to Malta’s unorthodox decision to charter private vessels to detain migrants at sea for weeks until they were eventually disembarked in Malta. The decision was lambasted by the MEPs coordinating the different political groupings – the EPP, the Renew Europe Group, the Greens/European Free Alliance and the European United Left – Nordic Green Left. The different MEPs having called on the European Commission to speak out on Malta’s decision to detain migrants out at sea and in some cases MEPs have also urged the Commission to speak out about the Memorandum of Understanding which was signed between Malta and Libya a few weeks back.

During the coronavirus pandemic, Malta and Italy moved to close their ports to migrant landings. Malta prevented humanitarian NGOs operating in the Central Mediterranean from disembarking while it informed that it could not guarantee succour people at sea. At the end of April, Malta for the first time, chartered four pleasure boats mostly owned by Captain Morgan to detain asylum seekers off Malta’s territorial waters.

Dupont noted that the coronavirus pandemic has hit hard the African continent and this will lead to more people thinking to leave their country. She also mentioned the tense situation on Greek – Turkish border.

“It’s pretty obvious that Malta is violating the rules”

Singling out Malta for its cooperation with Libya, in ‘t Veld lambasted the decision as “completely immoral”. She highlighted that the European Commission should be tougher with European Member States. The Dutch MEP also suggested the slashing of funds when Member States refuse to show concrete solidarity. “Maybe we should find a language which the Member States understand better,” in ‘t Veld said referring to funds.

Irish MEP Clare Daly from GUE also lambasted Malta’s decision to detain migrants offshore. She referred to Malta’s “blatant disregard” to its international obligations citing Malta’s cooperation with the Libyan Coast Guard, the turning away of boats carrying asylum seekers and ignoring distress calls. She asked what is the European Commission is doing in this regard.

German MEP Erik Marquardt from the Greens asked what consequences will Malta face in case it does pushback by proxies. He also referred to the Memorandum of Understanding signed between Malta and Libya. He asked how will one make sure that human rights are upheld in Libya and echoed the call for the European Commission to speak out.

The Memorandum of Understanding signed between Malta and Libya, when Prime Minister Robert Abela made an unannounced visit to Libya, also came under fire.

Spanish MEP from the Group of the European United Left – Nordic Green Left, Miguel Urban, raised legality issues on the bilateral agreements. He asked whether the European Commission has analysed the Memorandum of Understanding between Malta and Libya and whether this was in line with the European Union and International legislation. Marquadt similarly asked a question on the agreement.

A spokesperson for the European Commission DG for migration and home affairs said that the Commission had seen the bilateral agreement which called for an increase in operational cooperation and exchange of information, while the rest would fall on the European Union for financial support.

The EEAS representative Stefano Tomat only confirmed that it is a bilateral agreement but there are other issues which the EEAS and the European Commission are not aware of and have not been involved in.

Pact on migration to be presented – Commission

The European Commission is expected to present a pact on migration in the coming weeks. This may experience delays due to the coronavirus pandemic. The spokesperson for the DG Migration stressed that the European Commission was better prepared at this stage from the previous migration crisis. She highlighted that Member States should respect the principle of non-refoulement which would mean that push backs remain illegal.

S&D MEP Miriam Dalli who was elected on behalf of Partit Laburista replied that it was easy to criticise front line countries however the European legislation did not provide for mass crossing such as those being experienced in the Central Mediterranean. Asylum seekers become the responsibility of the country in which they first step in, Dalli pointed out, adding that this could never guarantee fair sharing among EU member states. Citing the number of people disembarked in Malta over the last few months and comparing to the country’s size, Dalli added that it was “beyond her” how Malta is expected to deal with the situation alone.

She called for permanent measures including a mandatory relocation mechanism and a European search and rescue mission. Dalli stated that front line states could not be expected to shoulder the responsibilities of the rest of the European Member States.