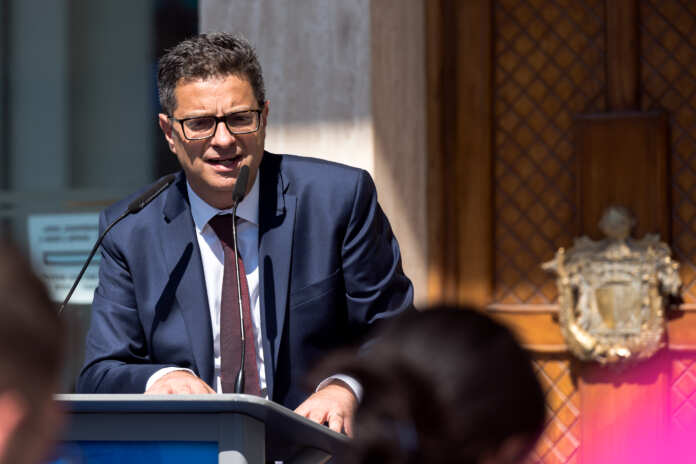 Partit Nazzjonalista Leader Adrian Delia said that children being given lessons in containers is a consequence of Malta’s success to Prime Minister Joseph Muscat. He said that Maltese and Gozitan citizens have become a problem to Muscat.

While addressing the second district meeting for the PN General Council in Sliema with the theme ‘Flimkien għal Pajjiżna’, Delia said that the Education Minister Evarist Bartolo not only refuses to acknowledge the problem, but he makes fun of those who think that Malta deserves better.

Delia said that now the masks of the Government are falling, so much so that Bartolo’s joke about closing schools and sending children and teachers to the Freeport was met by laughter by the Prime Minister. He said that Muscat’s problem is that he measures the country’s success not by how much better quality of life for the people, but by the number of people who are problems of success.

He said that in the Sliema district, Muscat definitely did not keep the promise to keep the environment as the Government’s priority as unabashed development, traffic and dust has suffocated the citizen’s lives. Delia also said that according to the Eurobarometer, high rents have become the second most grievous concern in Maltese life.

He said that Malta’s reputation in the last 10 days has been worn down by reports scaring away potential investment. He said that one of the main international banks in Malta said that a 20% decrease in profits are due to the damage being done to the reputation of Malta’s banking sector.

He said that the PN is not only criticising, but also making around 80 proposals on local councils, agricultural sustainability, and a regional council for Gozo where Gozitans themselves take decisions.

‘I want to persuade everyone’ – Delia

John Paul Cordina   February 19, 2020
A convicted murderer who has been jailed for life has partially won an appeal in which he argued that a separate 7-year jail term – incurred when he slashed a fellow inmate’s eye – was excessive.

Monique Agius   February 18, 2020
The two sites have been shortlisted from the sites proposed between 2017 and 2019 following a review in accordance to the provisions as laid out in the Civil Code. Wied Għomor and Wied il-Kbir in San Ġwann, the Plague Cemetery in Bormla, the inland and coastal area from Baħar iċ-Ċagħaq to Pembroke; tal-Għeriexem and il-Marġ, limits of Rabat, l-Għadira s-Safra; and a site in Bulebel.