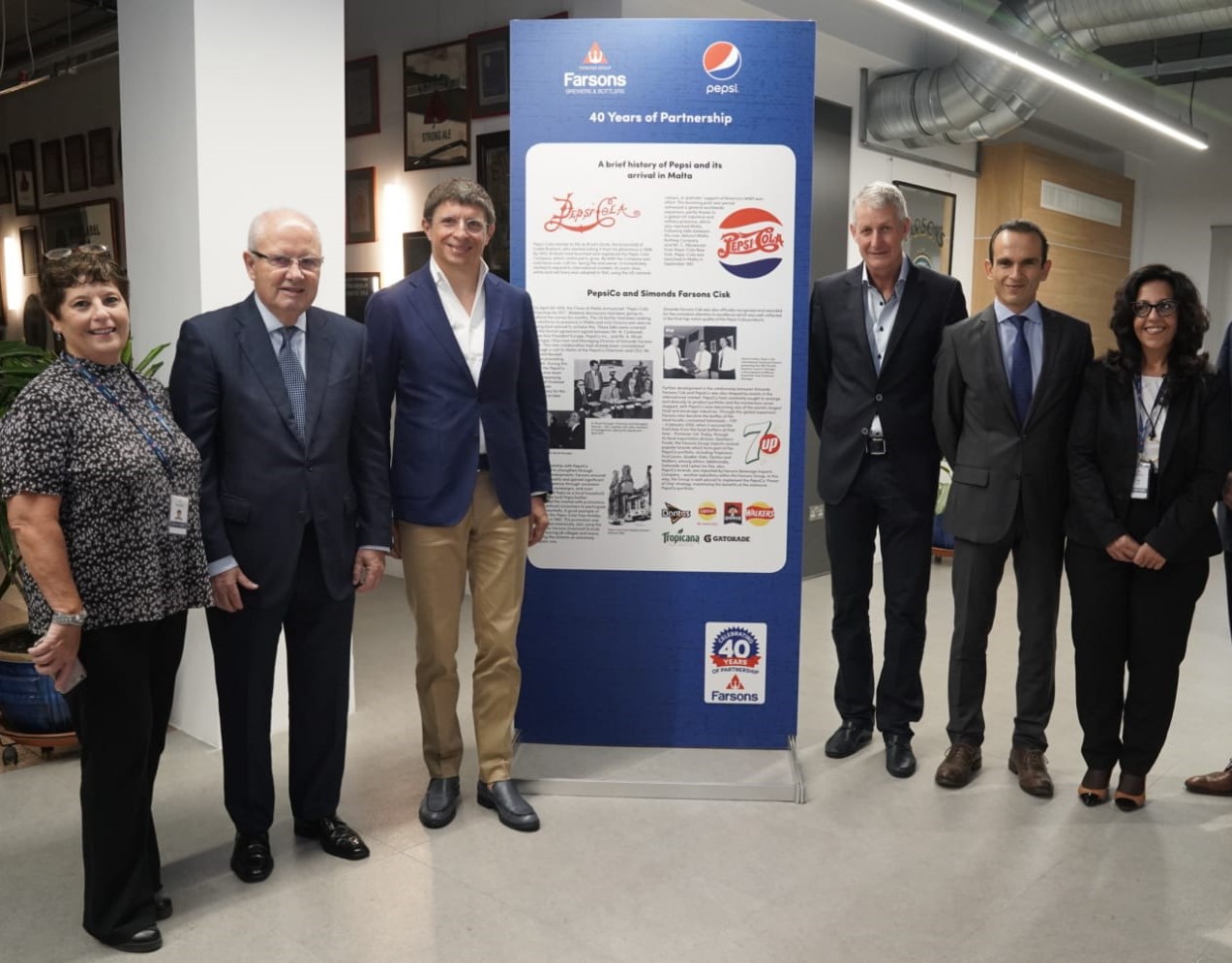 Mr Farrugia said of this historic milestone, “We are extremely proud to be celebrating this remarkable 40-year partnership with one of the world’s largest corporations in the global food and beverage industry and to continue to be part of PepsiCo’s exciting and outstanding journey.”

Mr Popovici commented, “We are very happy to celebrate together an incredible 40 years of partnership between PepsiCo and Farsons. Our relationship has developed a lot over these years, but we firmly believe our best years are still well ahead of us.”

Pepsi-Cola started its life in the late 1890s as ‘Brad’s Drink’, the brainchild of pharmacist Caleb Braham. The Company grew fast and expanded to international markets. PepsiCo Inc. was established through the merger of Pepsi-Cola and Frito-Lay in 1965.

The booming post-war period witnessed a general worldwide expansion, partly thanks to a global US industrial and military presence, which also reached Malta. Pepsi-Cola was launched locally in September 1951.

Over 20 years later, in April 1978, the acquisition of the Pepsi-Cola franchise by Simonds Farsons Cisk was announced with talks, which had been going on for some months, crowned by a formal agreement signed between the two companies.

The relationship between Farsons and PepsiCo continued to flourish throughout the years with further growth also resulting from developments in the international market. In 2002, Farsons secured the franchise for the bottling of 7UP. Through its food importation division, Quintano Foods, the Farsons Group imports several global brands from the PepsiCo portfolio, including Tropicana, Quaker Oats, Doritos and Walkers. Additionally, Farsons Beverage Imports Company, another member of the Farsons Group, imports Gatorade and Lipton Ice Tea.

Over the years Simonds Farsons Cisk has been officially recognised and awarded for the consistent attention to quality which is reflected in the final top-notch quality of the Pepsi-Cola products on the market.

The PepsiCo portfolio of food and beverages is available all over Malta and Gozo.

Amy Borg   January 27, 2020
Yesterday evening, the Armed Forces of Malta (AFM) have rescued a total of 95 migrants who were in distress. According to AFM the migrants have been brought to Malta by an AFM vessel and disembarked at 9:30am at Hay Wharf Base.

Coryse Borg   January 27, 2020
Set-up in 1989, CAP-Sounds is a music production and publishing agency in the heart of Germany which has always supported Maltese artists; ever since 1996 when Miriam Christine represented Malta at the Eurovision Song Contest.

Mario Schiavone   January 27, 2020
An estimated 10,000 pilgrims traveled from both near and far to attend Mass at the opening of the National Prayer Vigil for Life celebrated...