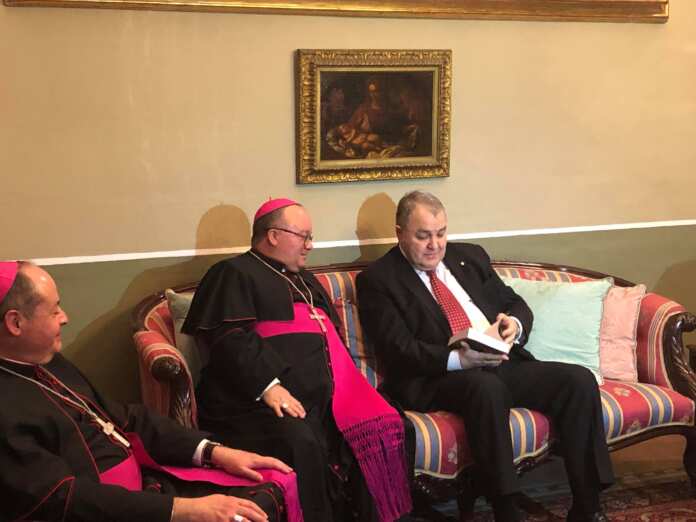 Archbishop Charles Scicluna stated that the Church was ready to discuss the recommendations put forward by the Venice Commission. Mgr Scicluna met with the high level officials and official bodies in order to exchange season greetings. Mgr Scicluna was accompanied by the Auxiliary Bishop Joseph Galea-Curmi and Archbishop Emeritus Mgr Pawlu Cremona.

The Venice Commission in its recent report on Malta found that too much power is concentrated in the hands of the Prime Minister. It observed that despite the Maltese legal system is based on the British one, the Prime Minister holds a powerful post which allows him to appoint the judiciary. According to the report, there is a lack of checks and balances in the Maltese system.

During his meeting with the Speaker of the House of Representatives, Mgr Scicluna said that despite not having yet read the report, he believes that post and powers conferred to the Prime Minister need to be revised. He remarked that the Church was willing to discuss the report for the common good.

The Speaker of the House along with the Members of Parliament paid a visit to the Archbishop. Farrugia explained that 80,000 people contributed to the discussions held in Parliament in 2018. He remarked that while there was still more work to be done, he praised the work done by the committees which met 198 times during 2018. A number which surpasses the number of times that there was a parliamentary sitting.

The Archbishop spoke about about the importance of having a secret vote, arguing that such a possibility would allow one to vote freely according to one’s beliefs. Mgr Scicluna warned against parliament acting as a “rubber stamp” for the executive but the executive should respect fully parliament.

Prime Minister Joseph Muscat along with a number of cabinet members discussed various themes with the Archbishop. During the meeting, Muscat, touched upon mental health explaining that a new hospital wing dedicated to mental health will be set up in Mater Dei. Muscat further explained that the Government aims to combat the stigma around mental health and that Mount Carmel Hospital would remain open for the benefit of those who cannot be transferred elsewhere.