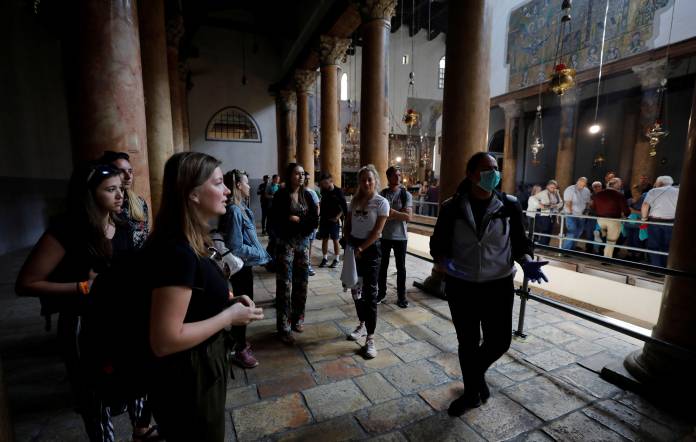 Palestinian President Mahmoud Abbas declared a 30-day state of emergency on Thursday and Bethlehem’s Church of the Nativity was closed following the discovery of seven cases of coronavirus in the traditional birthplace of Jesus.

The decree was announced by Palestinian Prime Minister Mohammed Shtayyeh, who decided to close all schools, colleges and kindergartens and to cancel foreign tourist reservations.

“We have decided to declare a state of emergency in all Palestinian areas to confront the danger of the coronavirus and prevent it from spreading,” Shtayyeh said on Thursday night.

The precautions were announced after Health Minister Mai Alkaila said authorities had identified seven positive cases, all of them Palestinian employees at Bethlehem’s Angel Hotel. A ban on foreign guests at West Bank hotels will also last two weeks, the tourism ministry said.

Israel’s Defence Minister Naftali Bennett ordered the Israeli military to close off Bethlehem, in cooperation with the Palestinian Authority, barring movement of Israelis and Palestinians with effect from Thursday evening.

The measures were a particular blow to Bethlehem, where businesses depend largely on visitors to the church, built on the site where Christians believe Jesus was born.

Just three months ago the mayor and hoteliers in Bethlehem were hailing what promised to be the best Christmas for two decades, with visitor numbers in 2019 numbers surpassing the 1.5 million people who came in 2018.

“This affects us dramatically,” said Joey Canavati, manager of the 58-room Alexander Hotel in Bethlehem. “Our workers are essentially laid off for the next 14 days. We will be closed down completely.”

Canavati said groups of tourists from the United States, Poland and Cameroon had already cancelled their bookings.

However British artist Banksy’s hotel in Bethlehem, The Walled Off Hotel, brought a touch of humour to the situation by strapping a surgical mask to the model monkey bellhop.

The Palestinian governor of the West Bank town of Nablus on Thursday ordered its Muslim and Christian holy sites shut as a public health precaution.

Fifteen people have been diagnosed with the virus in Israel.

On Wednesday, Israel ordered people travelling to Israel from Germany, France, Spain, Austria and Switzerland to go into home quarantine, and cancelled a military exercise with troops from the U.S. European Command.

Citizens from those countries would not be allowed into Israel unless they could show they had made quarantine arrangements ahead of time. Israel has already imposed the quarantine measure with regard to flights from Italy, China and Singapore.