Cardona had confirmed his intention to resign his seat in Parliament yesterday, but told Newsbook.com.mt that he continue to serve as Labour’s deputy leader for party affairs.

Chris Cardona confirms he will resign from Parliament 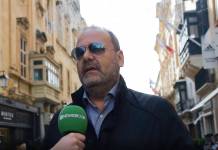 The Birkirkara lawyer was first elected to Parliament as a 24-year-old in 1996, and has always been confirmed to his seat since. In his resignation letter, he said that having spent half his life as an MP, he felt that he had contributed enough to Parliament.