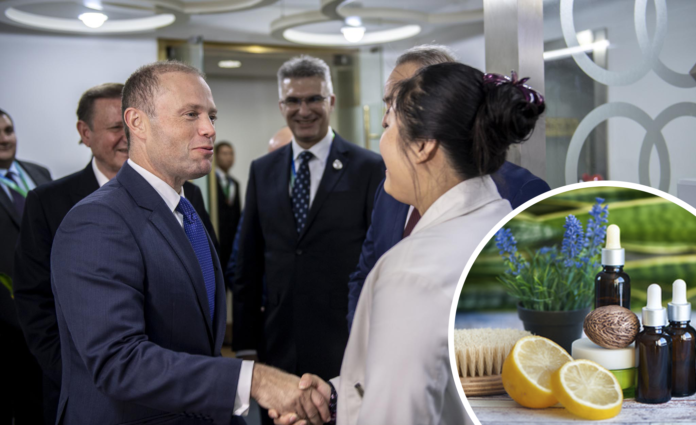 A Chinese company which has been making use of a Maltese company’s services in China shall be using Malta to bring its products to Europe. The Government explained in a statement that the company will be providing beauty products made with Chinese herbs.

Prime Minister Joseph Muscat met with representatives of this company. The new offices of Base Malta, a Maltese company based in Shanghai shall be helping Maltese companies start up in China as well as Chinese who open business in Malta.

The Prime Minister expressed satisfaction for all that the company had worked on off shore and thanked the owner, Noel Gauci for the good work he had done when promoting the Maltese Islands.

In a statement, the Government said that a Chinese drone company intends on investing in Malta and has already submitted an application with Malta Enterprise. Dr Muscat expressed the availability of the country to promote more investment, with the help of Malta Enterprise.

The Microsoft Founder, Bill Gates and the Alibaba founder, Jack Ma were amongst the participants in the Trade and Innovation Forum during the first international expo in Shangai, China.

Apart from the opening of the offices of Base Malta, the Prime Minister spoke during the forum about how technology and innovation are the main driving sources of the Maltese economy in every aspect.

Dr Muscat claimed that protectionism is the total opposite of innovation and the strengthening of technology since they provide many opportunities.

The Prime Minister also spoke about how the blockchain, saying that during the past few weeks, Malta had implemented the first laws related to this in the European Union and the world to regulate this industry.

Dr Muscat also mentioned the sector of Artificial Intelligence and claimed that technology is not limited to changing the work industry but also life in general.

Nicole Borg   January 19, 2020
A video uploaded on Facebook by Puttinu Cares shows Spiteri singing his famous song called Fejn Tħobb il-Qalb. Several people in the same room can be seen enjoying the atmosphere that the singer created for them. Others sway and sing along.

Nicole Borg   January 20, 2020
Christine will be bided farewell on Thursday 23rd January at St George’s Basilica and Rabat, Gozo. The La Salle Band will be marching to the funeral from 3pm, while the mass is set to start at 4pm.