China’s foreign ministry said on Friday that it extended congratulations to U.S. President-elect Joe Biden and Vice-President-elect Kamala Harris, who won the Nov. 3 election that President Donald Trump has refused to concede.

“We respect the choice of the American people. We extend congratulations to Mr. Biden and Ms. Harris,” foreign ministry spokesman Wang Wenbin said at a regular daily briefing. “We understand the results of the U.S. election will be determined according to U.S. laws and procedures,” he added.

On Thursday, President-elect Joe Biden was confirmed that he will win the battleground state of Arizona by Edison Research projected on Thursday which dealt another blow to President Donald Trump’s struggling effort to overturn the results of the Nov. 3 presidential election.

Biden’s win in Arizona gives the Democrat 290 electoral votes in the state-by-state Electoral College that determines the winner, more than the 270 needed to claim victory. Biden is also winning the popular vote by more than 5.2 million votes, or 3.4 percentage points.

On Thursday, Pope Francis also spoke to President-Elect Biden to congratulate and bless the second Catholic President in the history of the USA. 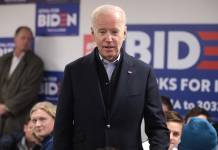