Speaking at the Newsbook Business Breakfast, Opposition Spokesman Toni Bezzina said that the indirect costs of traffic in the Maltese economy was calculated in 2012 at €275 million and this would cause concomitant expenses in other sectors such as the health. If, he said, we can invest in systems which pollute less, these costs would also decrease. Perit Bezzina said that the opposition too agreed with the construction of a metro bit widening roads, he said had a negative effect since it would increase the volume of traffic. He said that  this widening would be acceptable if this means that special lanes for electric cars, cyclists and pedestrians are created.

Perit Bezzina said that while education is important so that youths do not grow up thinking that the use of a car is indispensable, the infrastructure for alternative transport modes is also required. This, he underlined, needs to start from a very early age. Perit Bezzina said that even government cars and any organisation which has a car fleet, needs to be incentivised to being reliant on renewable energy such as electricity.

The event
Have we learnt nothing from COVID-19? Newsbook’s fully-booked Business Breakfast discusses traffic and mobility 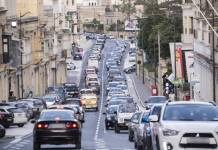 Parking has stolen space from the elderly – Prof. Maria Attard

The danger for cyclists on the road is real – BAG President