The amount of cases waiting to be heard and the specialization required in certain court proceedings requires an intervention at the legislative level, Chief Justice Mark Chetcuti said on the inauguration of the Forensic Year on Thursday. 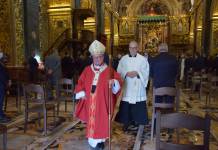 Addressing fellow members of the judiciary, Chief Justice Chetcuti who was appointed in April, spoke about the need to increase the number of members appointed to the bench, the amending of laws which would remove unnecessary bureaucratic procedures, and reviewing the law course to offer a specialised law course for potential litigators who are on the decrease.

Chief Justice Chetcuti also spoke about the need of more IT support for the judiciary and the administration as well as trained support staff who can work under pressure in a courtroom environment.

Speaking about unnecessary delays in court proceedings, Chief Justice Chetcuti said that he is hopeful that this could be overcome with perseverance and goodwill.

The chief justice referred to the difficulties brought about by the global coronavirus pandemic and the impact it had on the judicial system. During the pandemic, the court operated in line with the advice issued by the health authorities. Chief Justice Chetcuti remarked that the judiciary relentlessly despite the difficulties they met in the context of the public health emergency.

During his address, Mr Justice Chetcuti highlighted delay in court proceedings as one of the biggest challenges being faced by the judiciary. He remarked that a member of the judiciary needs to be academically prepared but also practical in managing the case load before them. Cases need to be decided without undue delay and by delivering justice.

“One needs to make themselves available and serve justice,” he said.

During his address, Chief Justice Chetcuti said that the government along with the University of Malta should consider revising the law course in order to create a law course which is more specialised especially for those potential lawyers wishing to work in litigation.

He noted that despite the high number of lawyers that graduate every year, the number of lawyers that choose to litigate in court remains low. At present this is already a problem with only a few number of lawyers working at court. He warned that if the issue is not addressed, in the future Malta might be faced with a situation where there are not enough lawyers practicing in court as well as lawyers with enough litigation experience to become appointed to the bench or become prosecutors.

Chief Justice Chetcuti highlighted that in the criminal and commercial law fields there was a shortage of practioners with the necessary expertise to assist members of the judiciary in these fields.

He thanked the judiciary, the administrative and support staff and lawyers.

The government has wished the judiciary, the court employees and all legal practioners well for the upcoming year.

Justice Minister Edward Zammit Lewis noted that in these unprecedented times due to the global pandemic everyone is required to cooperate to ensure that justice remains accessible to all.

The inauguration of the Forensic Year marks the new year for the court system.