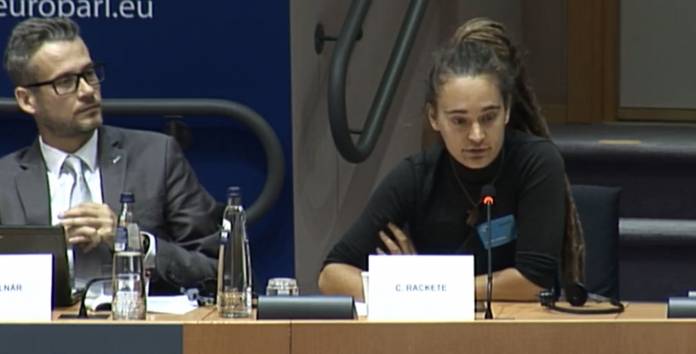 Rackete addressed the European Parliament Committee on Civil Liberties, Justice and Home Affairs on Thursday. Prior to the start of the debate, the committee dedicated a minute of silence for the memory of all people who lost their lives in the Mediterranean sea.

Rackete was speaking on the six-year anniversary when over 360 migrants drowned off the coast of Lampedusa.

“I am in fact actually waiting for the moment where the Libyan Coast Guard will give me an instruction I cannot comply with,” Rackete told LIBE.

Rackete remarked that instead of addressing the situation the EU has resorted to policies which might by in breach of international law, citing externalisation of responsibilities by EU Member States, omission of rescues and delegating responsibility to a country at war. She contrasted this, with the work being carried out by European civil society who since then have moved in to create a civil fleet that would carry out search and rescue in the Mediterranean sea.

“There is hope coming from the European civil society at sea which continue to defend the principle of solidarity and the respect to everyone’s right to life and the rule of law,” Rackete affirmed.

Speaking about her experience with Sea Watch, she recalled her first rescue mission where hundreds of lives were saved. Captain Rackete also recalled a terrible shipwreck in which their vessel was surrounded by corpses.

As a Sea Watch volunteer, Rackete was also involved in aerial monitoring, where they have witnessed cases of people on boats being left alone at sea or being forcibly returned to Libya.

Speaking about the standoff which forced Rackete to enter the port of Lampedusa despite the closed port policy, the Captain described it as the a disruptive experience. Left at sea for 17 days, Rackete reiterated that she had a duty and responsibility towards those on board to bring them to safety.

“I was received as though I was driving a ship carrying the pest rather than a humanitarian ship carrying vulnerable and exhausted people,” Rackete said.

Speaking about the aftermath, Rackete referred to the unwanted attention, invitations and awards she received from various countries and asked “Where were you when we were out there asking for help through all possible operational, legal, media and diplomatic channels?”

It was an act borne out of necessity and responsibility towards everyone I had on board including myself, Rackete explained to the LIBE committee.

Describing the situation on board, Rackete said that the crew and herself did not sleep for days, and had to schedule extra shifts on deck to ensure that none of the people rescued committed suicide.

Rackete pointed out that the standoff could have been called off earlier, since a municipality in Germany had offered to take up the people rescued.

Speaking about ad hoc agreements, Rackete explained that disembarkation of rescued people needs to happen in compliance to existing laws and should not be conditioned by ad hoc agreements based on the will of individual member states which are each time motivated by unknown interests.

A reform of the Dublin II regulation is long overdue, Rackete said, as well as ensuring safe passages to those fleeing persecution and seeking asylum.

‘Every time a NGO carries out a rescue mission, a criminal investigation is opened, isn’t this a distortion of justice to punish civilians defending the rule of law and protecting unlawful state practices,’ Rackete asked the MEPs present at the hearing.

Read: Watch: Minister Farrugia fails to reply on whether Libya is a safe place

Next week EU interior ministers are meeting in Luxembourg to thrash out the details of the plan, which requires all vessels engaged in rescue operations to comply with instructions ‘given by the competent rescue coordination centre.’ This means that NGO vessels would likely have to take instructions from a country at war.

Rackete observed that various court rulings have declared that Libya does not provide a place of safety.